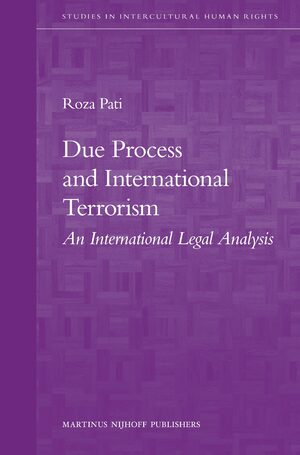 Due Process and International Terrorism

Author: Roza Pati
Acts of terror on a global scale are straining to the breaking point the due process guarantees of the legal systems of modern democracies. In unequalled breadth and depth, this book analyzes the rights of persons suspected of a crime, in normal times and emergencies, from the pre-trial phase to the trial and the post-trial period under all the universal and regional human rights treaty regimes, pertinent customary international law, general principles of law, international humanitarian law as well as the hybrid procedures developed by international criminal tribunals.

The book then presents a detailed analysis of United States’ due process guarantees, in peacetime and in war, and the executive, legislative and judicial responses to the attacks of September 11, 2001. Professor Pati appraises the American actions in terms of international law’s due process guarantees and proposes courses of action which can better defend a public order of human dignity.

"Thanks to Pati's rigorous research and balanced and wise appraisal, her book will be indispensable for scholars and decision makers. " Professor Michael Reisman, Yale Law School & former President, Inter-American Commission of Human Rights

"This book should be read by everyone who is interested to know more about the narrow borderline separating legally acceptable from unacceptable measures in the fight against international terrorism." Professor Eckart Klein, University of Potsdam Faculty of Law & former Member, United Nations Human Rights Committee


All those interested in the criminal due process of law and its global and regional standards, as well as in the treatment and adjudication of suspects in the global struggle against terrorism. It would be of particular interest to scholars and decision-makers in the field, to legislators and their advisors, other government officials, the military, the media, and experts as well as practitioners in the field of human rights, military law and criminal procedure.