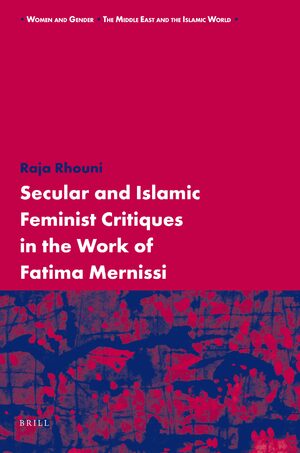 Secular and Islamic Feminist Critiques in the Work of Fatima Mernissi

Series:  Women and Gender: The Middle East and the Islamic World, Volume: 9
Author: Raja Rhouni
This book presents a detailed critical analysis of the work of Fatima Mernissi. Mernissi is considered to be one of the major figures in Feminist thought for both Morocco and Muslim society in general.
This work discusses Mernissi’s intellectual trajectory from ‘secular’ to ‘Islamic’ feminism in order to trace the evolution of so-called Islamic feminist theory. The book also engages critically with the work of other Muslim feminists, using frameworks and approaches developed in the works of Muslim reformist thinkers, namely Mohammad Arkoun and Nasr Abu Zaid, with the aim of engaging the theorization of this emerging feminism.
E-Book (PDF)

€157.00$195.00
​
Add to Cart
Raja Rhouni studied Cultural Studies, receiving her Ph.D. in 2005 from the Cultural and Development Studies program at Mohammad V University of Rabat, Morocco. She has published a number of articles on the work of Fatima Mernissi and Islamic feminism.
Graduate students and experts, and a wider readership interested in Islam and feminism.