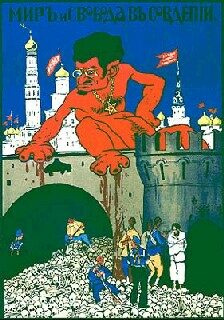 Civil War
The collapse of the Tsarist regime and the Provisional Government in 1917 left a power vacuum in the former Russian Empire. In the resulting chaos, a number of both real and shadow governments emerged. These ranged from centralist (Bolsheviks, Whites) through separatist-nationalist (Ukraine, Cossack Hosts, Transcaucasian Republics) to peasant-anarchist (Makhno) governments. Although the Bolsheviks had no trouble seizing power in November 1917, they managed to consolidate their new position only after several years of bitter struggle in a major civil war with the counterrevolutionary forces referred to as the "White Movement."

Miraculous survival
Until recently, the sources that could shed new light on Russia's civil war period (1918-1922) were not available to researchers. Because of the instability and constantly changing conditions of the civil war, it was impossible to collect the numerous volatile, short-lived newspapers, which were constantly appearing and disappearing. Daily papers meant for mass consumption were sent to the front line, and over it into the enemy's territory. Once read, they were used either to roll cigarettes or to bind feet, and consequently disappeared without trace.
In the 1920s, 1930s, and early 1950s, there were "ideological purges" of the newspaper stocks held by Soviet libraries. During these purges, many of the White Movement press items that had miraculously escaped destruction were now destroyed, because they were regarded as ideologically harmful and superfluous. Those that were not destroyed were withdrawn from scholarly circulation and packed away in special depositories. All information about them was proscribed, which is why none of the larger archives or libraries possesses a complete list of titles or sets of the White Movement press of the period. This makes any copy of a newspaper - let alone whole sets - of the utmost importance.

Unique Collection
The collection is unique in that its contents reflect all aspects of life in that stormy period, which was replete with revolutionary upheavals and civil strife. The variety of material published in these newspapers is astounding. Alongside material reflecting political issues and the burning topics of the day, the collection presents the widest range and variety of newspapers, from those carrying marriage announcements to a batch titled "On the way: News from Chairman of Revolutionary Council Trotsky's Train." This latter newspaper was dubbed "anti-Bolshevik" after Trotsky's rift with J. Stalin. The IDC collection contains official civic and military documents from the White Movement executive organs, central and local news, news from the civil war fronts, information about the activities of regional and local administrations, and press releases from credit, industrial, and cooperative stablishments and savings banks. Juxtaposed with these are facts about everyday life, reflecting the work of various charitable societies and organizations, theatrical performances, concerts, and other major and minor cultural events. Interspersed with these is a very wide range of advertisements. Thus, the collection will provide researchers with not only a rich store of materials to examine, but also the opportunity to make new discoveries.

Literary Treasures
The collection contains lots of material dealing with belles-lettres and literary criticism that holds indispensable information yet to be assessed by literary critics and scholars. Many prominent Russian politicians, scholars, and writers who later lived in exile, published their works in the newspapers of the period. For example, the well-known writer A.I. Kuprin published the newspaper The Prinevsky Krai; N.V. Ustrryalov - the ideologist of the Smenovekhovstvo - was in charge of the Russian Press Bureau under Admiral A.V. Kolchak's government, and also actively cooperated with a number of White newspapers in Siberia; the fathers of the "White Idea" - namely N.N. Lvov and V.V. Shulgin - were active in the south of Russia; and B.A. Suvorin was the publisher of The Evening Time, the largest White newspaper in southern Russia.
A number of widely known writers and poets - for example, Vs. Ivanov, M. Voloshin, Teffi, A.V. Amphiteatrov, and A.T. Averchenko - published their literary pieces and essays in various White newspapers. These newspapers also contain a great variety of drawings, caricatures, and chastushkii (two- or four-line ditties on some topical or humorous theme).

Structure of the Collection
The term "anti-Soviet newspapers" embraces all the newspapers containing anti-Bolshevik propaganda published in the territories controlled by the Whites and the Reds in the period 1918-1922. In accordance with the character of its materials, the collection can be divided into three parts.
The first, and largest, part contains 405 White Movement newspapers. This is the periodic press of different White Guard governments, along with press items from various military and civic organs, establishments and organizations of anti-soviet orientation. Also in this category are most newspapers published in the territories that were controlled by White Movement governments. Such newspapers, which on the whole were either neutral to the White governments or showed some respect for them, were delegated to the care of the special depository for the simple reason of having been published in the territories controlled by the Whites. Practically all the newspapers of the White Movement governments are represented in the NLR collection.
The second part, though smaller (287 titles), is also of extreme importance: it comprises the newspapers that were published in the territories controlled by the Soviets but which were opposed to the "Bolshevik commissars state," though some of them supported the idea of keeping the Soviets "without Bolsheviks," and were extremely critical about some of the Bolshevik government's decisions. These included Social Revolutionary (SR) newspapers, newspapers that were dubbed "petty-bourgeois" by the Bolsheviks, and anti-Bolshevik newspapers with different Russian Social Democratic Labor Party affiliations. The "petty-bourgeois" newspapers were primarily meant for various categories of service providers (e.g., small shopkeepers, cooks, etc.), and paid little attention to the "class struggle" or the glorification of the power of the People's Commissars; in fact, they simply ignored this power.
The third, and smallest, part (six titles) comprises émigré newspapers published by Russians in Harbin, China.

Provenance
The history of this collection is connected with the name of N.V. Iakovlev (1891-1981), a well-known literary scholar and a participant in S.A. Vengerov's Pushkin Seminar. In 1919, the Russian (Omsk) government of A. Kolchak created the Temporary Bureau of the Book Chamber and appointed Iakovlev as its director. In Omsk, on August 1, 1919, Iakovlev called for people to collect and preserve any and all printed material, "since the events we are living through have world-wide significance." The result is the world's largest collection of regional White Movement newspapers and leaflets. In 1920, the collection was taken to Petrograd and handed over to the custody of the Petrograd Book Chamber. When, later in the same year, the capital was moved to Moscow , the collection was transferred to the Russian Public Library (now the NLR).

Finding aids
A catalogue of this collection - Nesovetskie gazety 1918-1922. Katalog sobraniia Rossiiskoi natsional'noi biblioteki. Sankt-Peterburg: Rossiiskaia natsional'naia biblioteka, 2003 - was completed by Prof. G.V. Mikheeva and published by NLR. The catalogue provides an alphabetical list of newspapers' indexes of personal names and places of publication. It is available together with the microfiche collection.
Researchers who are interested in the regional spread of the newspapers can get this information from the regional subdivisions of the newspapers in the collection, which groups newspapers territorially (i.e., those published in southern Russia, Siberia, etc.). This list is available on the IDC website.

The National Library of Russia
The National Library of Russia St. Petersburg (www.nlr.ru) is one of the world's largest libraries: its collection numbers more than 32.8 million items, 6 million of which are written in a foreign language. The library possesses one of the largest collections of White Movement materials. Until recently, these newspapers were sealed in a special depository at the NLR and were unavailable to researchers. Until now, neither facsimile nor any other type of reproduction of these
Microfilm Collection