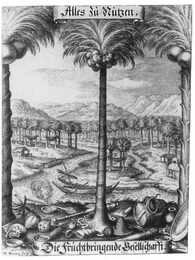 Discovery and experiment
The German Baroque period, viewed through letters and science, is marked by a flowering of intellectual activity within a dazzling array of new scholarly fields. It is particularly interesting for students of German cultural history as it is the period in which the German language, after a long period of neglect, once again became the medium for scholarly and literary communication of the highest calibre. The Baroque was deeply imbued with the spirit of discovery and experimentation, and it gave rise to the creation of new styles of literary craftsmanship. This culminated in the classical forms of German lyric, drama, narrative and epic in the eighteenth and nineteenth centuries. The Baroque period can, with considerable justification, be regarded as the cradle of modern German literary culture.

Learned societies
A particularly interesting aspect of the Baroque was the emergence of social structures that promoted literacy and the humanistic arts and sciences. Throughout Europe "learned societies" such as the Accademia della Crusca in Florence were founded to bring scholars and writers together as well as to encourage humanistic discourse. In Germany, the Fruchtbringende Gesellschaft, or the Fruit Bearing Society, was formed in 1617, and amongst other things, it set itself the task of propagating German as both a scholarly and literary language. The Fruit Bearing Society was also known as the Palmenorden (Order of the Palms) because its emblem was the then very exotic coconut palm tree, and its motto was “Alles zu nutzen” – everything for a purpose – in keeping with the German conception of the palm tree as the source of countless material goods used in housing, clothing and nourishing the indigenous peoples of the new world that Europe was in the process of discovering. The Fruchtbringende Gesellschaft was Germany's first such learned society, and was one of its most important in terms of the role it played in encouraging the use of written German.

M. Bircher
The great Baroque scholar Martin Bircher spent thirty years collecting books, manuscripts, engravings and other art objects relative to the Fruit Bearing Society. His remarkable collection concerning the membership and publications of the Fruit Bearing Society includes over 685 printed books, 335 manuscripts, 300 copperplate engravings, and 21 maps and other similar graphic materials. These items cover a wide range of subjects, in keeping with the interests of the Society's membership, and include law, art, religion, theology, history, near Eastern philology, geography, music, hagiography, and mathematics. The manuscript materials, in particular, offer a rich variety of official documents and correspondence by and about the members of the Fruit Bearing Society, and the graphic materials provide a unique source of primary information from this period.

Eminent authors
Representative of the kind of rare and valuable printed works in the collection is Justus Georg Schottelius' Ausführliche Arbeit Von der Teutschen HaubtSprache, published in 1664. Conceived as a vehicle for the propagation of "correct" German and as a tool for linguistic unification of the German-speaking lands, there is no more significant publication in the annals of the Society. Schottelius, known as " Der Suchende" or "The Seeker" to his Fruit Bearing brothers, attempted to create an exemplary vocabulary of German based on the works of contemporary authors, and in the process has created more than just a dictionary of the language, but rather as Martin Bircher writes, eine kleine barocke Literaturgeschichte. Curt Faber du Faur was of the opinion that this work makes him "if not the father, then the grandfather of Germanic philology”. Similarly the collection is rich in other rare volumes and first editions by many eminent German Baroque literary authors such asMartin Opitz, Andreas Gryphius, Georg Philipp Harsdoerffer, Johann Philipp Moscherosch, Friedrich von Logau, and Philipp von Zesen.

Autograph documents
The autograph documents in the collection offer another exciting dimension to students and scholars of the period. They range from the official records of the Society to private correspondence between, to and from Society members. Those concerning Prince Ludwig I of Anhalt-Köthen are reasonably representative of the collection’s scope and breadth Martin Bircher collected 26 distinct items in connection with Ludwig, which vividly detail the political turmoil surrounding the confessional disputes raging in Germany at that time. Among them are a letter from Wallenstein to Ludwig in response to the latter's entreaties that Wallenstein's army spare the principality of Köthen, in which Ludwig writes of "the deplorable condition of this miserable country" and of the fields, which "lay unsown, bare and deserted, the cattle and victuals eaten up, the landscape ruined, credit wiped out and all the country’s property gone." Wallenstein's letter to Ludwig is reassuring and indeed bestows upon the prince a generous travel pass, which allows him to pursue a badly-needed cure at the baths in Wildungen. Other important letters to Ludwig include those from Maria Eleonore, Queen of Sweden, widow of Gustavus Adolphus, and from the Emperor Ferdinand III dated 23 August 1645, in which he summons his electors to a peace treaty congress to be held in Osnabrück or Münster later that year – the first step on the long path which led to the Peace of Westphalia in 1648.

Pictorial materials
Likewise the iconographic materials in the collection give a vivid sense of the persons, places and artistic themes of the German Baroque. Many portraits of Society members have been included, as well as the “emblems” or coded engravings which depicted their most striking personal characteristics and gave rise to each member’s “cognomen” in the Society, the sobriquet by which he was known to other members. Other valuable kinds of pictorial materials include maps and aerial views of cities, ornately decorated proclamations and decrees, and various sorts of highly inventive tables and graphs which codify the elements of German grammar and word formation.

Valuable addition
The Fruit Bearing Society collection is a valuable addition to any library that supports the study of German and Central European history in the early modern period. The careful and knowledgeable manner in which it has been compiled combined with the scholarly thoroughness of its cataloguing make it a truly unique resource for both students and advanced scholars alike. For researchers, it is a breathtaking collection of primary sources which vividly portray the period and place. Furthermore, it serves as a microcosm of 17th century Germany which stands in stark contrast to the terrible depredations that marred a great part of that period.