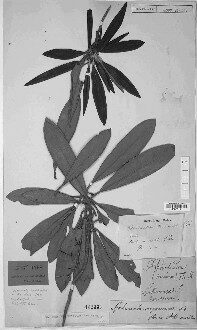 The Siebold collection
The Leiden branch of the National Herbarium of the Netherlands (NHN), formerly the Rijksherbarium, houses many important botanical collections. One of these is a 19th century collection of Japanese plants, generally referred to as the "Siebold" collection. The plants belonging to this collection were gathered during a period in which Japan was still closed to all western nations except the Netherlands. A considerable number of the c. 12,000 specimens, which include phanerogams as well as cryptogams, were brought together by the famous German physician P.F. von Siebold (1796-1866). In 1823 the Government of the Dutch East Indies sent him to Japan as the physician of the factory on Deshima, an artificial island in the Bay of Nagasaki. He also had the task of collecting information about the various aspects of Japan.
Von Siebold thought himself very lucky to go to Japan. Almost nothing new had been learned about the Japanese flora since the publication of Thunberg's Flora Japonica in 1784. For Von Siebold this meant that there were many opportunities to make new discoveries. Even before he arrived on Deshima, he planned to describe the fauna and flora of Japan as completely as possible and to collect all the species to be found there. In 1823 he wrote that he would not leave Japan before he had collected all the material needed for the preparation of a Flora Japonica (Schmid, 1942).

Von Siebold's collaborators
Von Siebold not only collected specimens himself, but also obtained many specimens from his Japanese students and collaborators, such as Mizutani Sugerok (1779-1833), Ohkôchi Zonshin (1796-1882), Ito Keiske (1803-1901), and Katsuragawa Hoken (1797-1844), one of the physicians to the Shogun. There are also Japanese plants present which, although not collected by Von Siebold personally, are counted as being part of the "Siebold" collection in the widest sense. These include plants collected by Von Siebold's assistant and successor on Deshima, H. Bürger (1806?-1858) who stayed on Deshima in the period 1825-1832 (and for some months in 1834); and the dried plants assembled by collectors Von Siebold sent out to Japan after his own departure.

Von Siebold's society
In 1839 Von Siebold established a society in the Netherlands for the introduction and cultivation of Japanese plants. To collect living plants for this society, Von Siebold sent J. Pierot (1812-1841) to Japan in 1840. Pierot, however, died on his way there, but while on Java (together with G. Bisschop) he bought a collection of dried Japanese plants that may have been collected by Bürger. C.J. Textor (1816-x) succeeded Pierot as a collector for Von Siebold's society. The dried plants he collected were sent directly to the Rijksherbarium.

O.G.J. Mohnike
The first physician on Deshima after Von Siebold was O.G.J. Mohnike (1813-1887). He stayed in Japan from 1848 to 1851. As the official in charge of the natural sciences he oversaw the study and collection of natural history materials. Although there is no direct relationship between the plants collected by Mohnike and Von Siebold, these have been added to the collection for the sake of completeness.

Largest collection of Japanese plants
The plants Von Siebold collected during his stay in Japan (1823-1829) were not the first Japanese plants to have reached Europe. E. Kämpfer (1651-1716) and C.P. Thunberg (1743-1828) had collected specimens in Japan in the 17th and 18th century respectively. However, the herbarium Von Siebold assembled was the largest collection of Japanese plants at that time. According to a catalogue of plant names it covered some 2,200-2,300 species of phanerogams (Hoffmann & Schultes, 1853). Publication on the Japanese flora at that time was impossible without consulting the Japanese collections in Leiden. Publications on the Japanese collections ( Flora Japonica) By 1829 Von Siebold had published on the Japanese Hydrangeas, a genus in which he was very interested (Von Siebold, 1829). Together with the German botanist J.G. Zuccarini (1797-1848) he started the publication of his Flora Japonica in 1835. After the death of Zuccarini in 1848 this project came to a halt. Also with Zuccarini, Von Siebold described many new genera and species based on the herbarium collections (Von Siebold & Zuccarini, 1843; 1845; 1846). The last two publications were intended to be as complete a representation of the Japanese flora as possible.
F.A.W. Miquel (1811-1871), director of the Rijksherbarium from 1862, was also very interested in the Japanese collections. After Von Siebold died in 1866, he published some new parts of the Flora Japonica. He also published on the Japanese collections in the Annales Musei Botanici Lugduno-Batavi (1863-1870), in which he described many new taxa, and in his Prolusio florae Japonicae (1866-1867). The latter is mainly a reprint of the Annales. In 1871 W.F.R. Suringar (1832-1898) succeeded Miquel as director of the Rijksherbarium. He was especially interested in the Japanese algae and published on them in the Algae Japonica (1870) and in the first two volumes of the Musée botanique de Leide (1871-1875).

Type specimens
The "Siebold" collection therefore contains many type specimens - specimens to which a certain plant name will always be linked. Many of the type specimens of plants named by Von Siebold, or by Von Siebold and Zuccarini, can be found here. Furthermore, many names created by Miquel and Suringar are based on this collection. However, the Japanese collections were not only studied in the past. In recent times they have been the subject of ongoing research. From a source of new species they have become important in the study of the history of early Japanese botany. Since 1995 T. Yamaguchi and N. Kato have visited the NHN many times to study the Japanese collections. The results of their extensive studies have been published amongst others in the Japanese periodical Calanus (Yamaguchi, 1997; 1998; 2003).