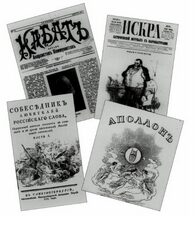 Russian Periodicals and Serials (up to 1917)

Editor: Julia Gerasimova
Russian Periodicals and Serials (up to 1917)

Collection of 1,213 titles of Pre-Revolutionary Russian periodicals and serials selected from various collections published by IDC Publishers. Includes many kinds of magazines, newspapers and serials ranging from publications of academies of science, universities, and learned societies to magazines for women and children. A separate group contains indexes to periodicals and serials, and monographs on the history of journalism in Russia. The material in the collection was published in the territory of the Russian Empire and the USSR (including the Russian Federation, Ukraine, Belorussia, Baltic Republics, Azerbaydzhan, Armenia, and Georgia, as well as several Polish provinces which were once part of the Russian Empire). Collection also contains Russian emigrant periodicals printed abroad.
Microfiche Collection