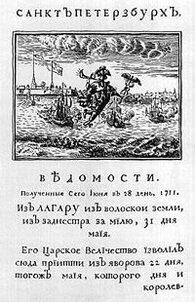 Sankt-Peterburgskie Vedomosti [St.-Petersburg News], the second oldest Russian newspaper, was born in 1728 as a successor of Vedomosti o voennykh znaniiakh i inykh delakh dostoinykh znaniia i pamiati [News about Events, Both Military and Otherwise, Fit Both to Know and to Remember], which was published between 1703 and 1727. Sankt-Peterburgskie Vedomosti, the only Russian newspaper, that was published without interruption between 1728 and 1914. For several decades, it was the only Russian periodical; it did not have to face competition until 1756, when the Moskovskie Vedomosti [Moscow News] appeared. It makes it one of the most important sources for the history of Imperial Russia during its final two centuries.
Sankt-Peterburgskie Vedomosti is now completely available on microfilm. All the lacunae in the old collection of IDC Publishers have been filmed in the most prominent Russian libraries in St. Petersburg: the National Library of Russia and the Library of the Academy of Sciences (BAN).
Microfilm Collection