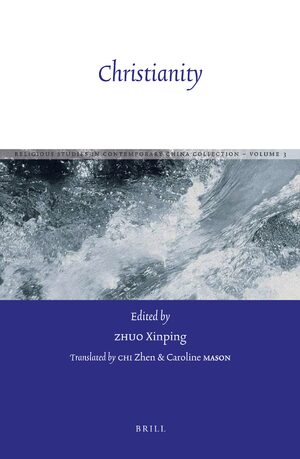 Editor: ZHUO Xinping
Translator: Zhen Chi
Chinese Christianity is fascinating and perplexing. Yet, although its existence can be dated back to the Tang Dynasty, when Christianity, in the form of Nestorianism, first arrived in China, it has not been extensively researched by Chinese academics. This volume is devoted to this topic and consists of twelve chapters, written mostly by leading mainland Chinese scholars. These writings shed light on five themes: epistemological reflection on Chinese Christian theology; interactions between Christianity and Chinese culture; the empirical and historical examination of Christian ethics and social development in China; the Chinese understanding of the Bible as literature; and the remarkable contribution that Christianity has made to Chinese higher education and cultural exchange with the external world.
E-Book (PDF)

€185.00$224.00
​
Add to Cart
ZHUO Xinping, Ph. D. (1987) in Philosophy, Ludwig-Maximilians-Universität München, is a researcher and the president of the Institute of World Religions at the Chinese Academy of Social Sciences. He is also the president of the Chinese Association of Religious Studies and has been a member of the German Association for the History of Religion since 1988. Dr. Zhuo has published extensively on religion in general and Christianity in particular. His academic publications include Comparative Studies on Contemporary Chinese and Western Theory of Religion (in German) (Peter Lang, 1988) and a dozen of books on religion in Chinese.
Chi Zhen, Ph.D. (2007), National University of Singapore, is Associate Research Fellow at the Shanghai Academy of Social Sciences. He has published monographs and articles on Chinese intellectual history. He teaches modern Chinese history at China Executive Leadership Academy Jinggangshan.
Caroline Mason is a translator based in the north of England. She studied Chinese in London, at Harvard, and in Taiwan, Hong Kong and Beijing. For many years a lecturer in Chinese at Durham University, she now teaches part-time on the MA in Translation and Interpreting at Newcastle University. Her published translations include numerous short stories and articles, and A Critical History of New Music in China, by Liu Ching-chih (CUHK Press, 2010).

International Advisor: Ryan Dunch University of Alberta and Chloë Starr Yale University
“This collection goes beyond many other Chinese scholarly volumes on Christianity in that around half of the chapters deal with more or less con¬temporary perspectives. […] This volume demonstrates for an English-speaking audience the depth and breadth of Chinese scholarship on Christianity.”
Fredrik Fällman, University of Gothenburg, Review of Religion and Chinese Society, 3 (2016)

“This is a highly valuable volume of selected articles on Christianity written by Chinese authors translated into English. […] the volume is of interest not only for Western experts in the field of Chinese religions, but it also provides helpful first-hand material in translation for students and scholars in World Christianities who have no command of Chinese, offering a glimpse of the types of scholarship and reflection produced in Mainland Chinese academia.”
Christian Meyer, Freie Universität Berlin, Journal of Chinese Religions, Vol. 44 No.2, November 2016

Part I: STUDIES IN CHRISTIAN THEOLOGY

Chapter Ten The Vicissitudes of Missionary Universities in China: Evidence from the Miner Searle Bates Papers
Zhang Kaiyuan
Chapter Eleven Some Tentative Comments on the Influence of Ferdinand Verbiest on the Emperor Kangxi’s Policy towards Catholicism
Lin Jinshui
Chapter Twelve The Jesuits in China and the Rise of Early European Sinology: A Brief Discussion of the Connection between Michał Piotr Boym and Athanasius Kircher’s China Illustrata
Zhang Xiping

All interested in the history of Chinese Christianity, and anyone concerned with the development of Christianity in present-day China.