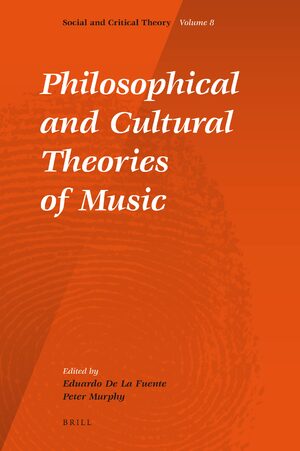 Philosophical and Cultural Theories of Music

Editors: Eduardo de la Fuente and Peter Murphy
Music is a ubiquitous and hard to grasp cultural form. It is semiotically and aesthetically open-ended; yet even a 'non-musical' person is able to follow the basics of rhythmic structure and flow. Its presence in social and cultural life is further complicated by its multiple forms of existence - as both 'live' and 'technologically mediated', as self-referential language and as accompaniment to text, dance and other cultural expressions. This collection brings together philosophers, sociologists, musicologists and students of culture who theorize the multiple roles of music through cultural practices as diverse as opera and classical music, jazz and pop, avant-garde and DIY musical cultures, music festivals and isolated listening through the iPod, rock in urban heritage and the piano in contemporary Asian societies.
E-Book

€149.00$184.00
​
Add to Cart
Eduardo De La Fuente, Ph.D (1999) in Humanities, Griffith University, is Lecturer in the School of English, Communications and Performance Studies, Monash University. He has published widely on the sociology of art and cultural sociology, including Twentieth Century Music and the Question of Modernity (Routledge, 2010).

All those interested in philosophy and social theory of music, the cultural study of opera, classical music, jazz, rock, music festivals, music and technology.