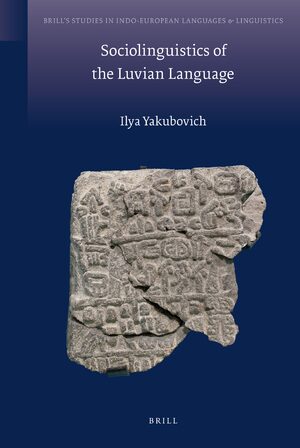 Sociolinguistics of the Luvian Language

Author: Ilya Yakubovich
Luvian is the language of Anatolian hieroglyphic inscriptions and a close relative of Hittite. This book explores the Luvian ethnic history through sociolinguistic methods, with an emphasis on the interpretation of contacts between Luvian and its linguistic neighbors, such as Hittite, Hurrian, and Greek. It is concluded that Luvian was originally spoken in the central part of Anatolia. Subsequent Luvian migrations were connected with the expansion of the Hittite state, where Hittite was the socially dominant language, but the Luvian speakers were more numerous. The unstable balance between the Hittite and the Luvian speakers continued to shift in favor of the second group, to the point that the Hittite elites were fully bilingual in Luvian.

€182.00$225.00
​
Add to Cart
Ilya Yakubovich is a recent graduate of the Joint Ph.D. Program in Linguistics and Near Eastern Studies of the University of Chicago. His research interests include language contact, socio-historical and Indo-European linguistics, Anatolian and Iranian philology.
Hittitologists, Indo-Europeanists, historians of ancient Anatolia, specialists in language contact.