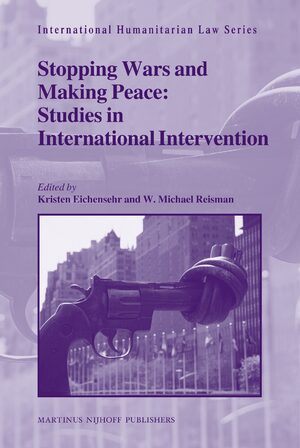 Editors: Kristen Eichensehr and W. Michael Reisman
During most of human history, war was a basic instrument of statecraft, considered, for the most part, a lawful, honorable, ennobling, and even romantic pursuit. By contrast, peacemaking remained a marginal and indeed incongruous interstate activity. A war would end when the belligerents ended it.
The experience of the twentieth century’s two world wars has changed, at least, the official view. The introduction of ever more destructive weapons, the drastic escalation of civilian deaths, and the economic and environmental devastation that modern war brought combined to forge an international legal impulse to stop, if not prevent, wars, resolve ongoing conflicts, and build peace.
Yet stopping a war, though a useful, if not indispensable, step toward making peace, does not lead ineluctably to peace. Nor does the international community’s interposition of “peacekeepers”; their title notwithstanding, peacekeepers only try to keep a stopped war stopped. Making peace is a separate operation, often applying some parts of the same armamentarium but in very different ways.
International efforts at stopping wars and making peace, in the era in which such initiatives have become lawful and virtuous, have proved remarkably unsuccessful. Yet the proliferation of ever more destructive weapons, the growing sense of insecurity and expectation of violence, the increasing difficulty of containing wars within a single arena, the threat of breakdown of order, with the prospect of epidemics and mass migration, all work to intensify the demand to stop wars and to make peace.
This volume explores these issues by analyzing the theoretical literature on stopping wars and making peace and its application to a number of concrete cases, including the Falklands, Nagorno Karabakh, Rwanda, Malaya, Thailand, and Mozambique. Each case examines one conflict and the efforts undertaken to stop it and transform it into a peace system. The case studies draw general lessons from the incidents studied, extracting guidelines and principles that might serve those called upon to stop wars and make peace and offering a number of instructive points.
E-Book (PDF)

€173.00$215.00
​
Add to Cart
W. Michael Reisman is the Myres S. McDougal Professor of International Law at the Yale Law School.
Kristen Eichensehr, Yale Law School ’08, holds an M. Phil. in International Relations from the University of Cambridge and a B.A. in Government from Harvard University. She has worked in academic and nongovernmental organization settings on a variety of use of force and post-conflict reconstruction issues.
Acknowledgments; Notes on Contributors; Introduction;
Chapter 1 War-Stopping Techniques in the Falklands Christina Parajon;
Chapter 2 Nagorno Karabakh: A War without Peace Nicholas W. Miller;
Chapter 3 War and Peace in Rwanda Tom Dannenbaum;
Chapter 4 War-Stopping and Peacemaking during the Malayan
Emergency (1948-1960) Colby E. Barrett;
Chapter 5 Separatist Insurgency in Southern Thailand: An Approach to
Peacemaking Jonathan Ross-Harrington;
Chapter 6 War-Stopping and Peacemaking in Mozambique Caroline A. Gross;
Index.