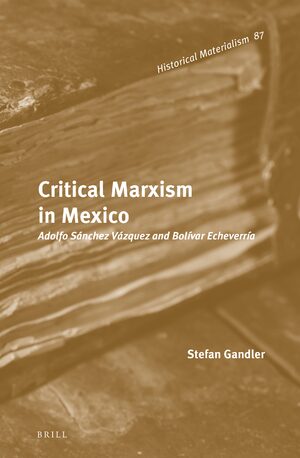 Author: Stefan Gandler
In Critical Marxism in Mexico, Stefan Gandler, coming from the tradition of the Frankfurt School, reveals the contributions that Adolfo Sánchez Vázquez and Bolívar Echeverría have made to universal thought. While in recent times Latin America has taken its distance from global power centers, and reorganised its political and economic relations, in philosophy the same tendency is barely visible. Critical Marxism in Mexico is a contribution to the reorganisation of international philosophical discussion, with Critical Theory as the point of departure.
Despite having studied in Europe, where philosophical Eurocentrism remains virulent, Gandler opens his eyes to another tradition of modernity and offers an account of the life and philosophy of Adolfo Sánchez Vázquez and Bolívar Echeverría, former senior faculty members at the Universidad Nacional Autónoma de México (UNAM).
E-Book (PDF)

€148.00$193.00
​
Add to Cart
Stefan Gandler (Munich, 1964) studied Philosophy, Political Sciences and Latin-American Studies at Goethe University Frankfurt, with Alfred Schmidt as Ph.D. adviser. Lives in Mexico City since 1993, teaching Philosophy and Social Theory at: UNAM, UC Santa Cruz and Universidad Autónoma de Querétaro.
"With this book Stefan Gandler has made important contributions to the study of Marxism and critical social theory in Mexico. Regarding the first contribution, this book expands the theoretical tools and insights within the canon of Marxist thought… [Critical Marxism in Mexico] is a useful commentary and critical analysis for theorists in Latin America and beyond. In toto this book serves as an important corrective to the Eurocentric nature of western and orthodox canonical Marxism." — Arnold L. Farr, in: Lateral 6/1 (2017) [ Full review]
Prologue to Peripheral Marxism by Michael Löwy
Preface to the English-Language Edition
Preface to the Original Edition in German
Preface to the Spanish-Language Edition
Introduction: From Eurocentric to peripheral Marxism

Part I: HISTORICAL AND THEORETICAL CONTEXT
1. The Life and Work of Adolfo Sánchez Vázquez
Beginning of the biography
The Spanish Civil War
The first period in Mexico, exile
The ‘new theoretical and practical posture’

2. The Life and Work of Bolívar Echeverría
The period in West Germany and West Berlin
From the divided city to the Mexican capital
Collaboration on the journal Cuadernos Políticos
Back to philosophy

3. The ‘State of Art’
a) On social philosophy in Latin America
b) On Adolfo Sánchez Vázquez and Bolívar Echeverría
Part II: ADOLFO SÁNCHEZ VÁZQUEZ: PRAXIS AND KNOWLEDGE

4. The Concept of Praxis
a) The term ‘praxis’ in various European languages
b) The terms ‘praxis’ and ‘práctica’ and the problem of their translation
c) General introduction to the concept

6. The Relationship between Philosophy and Praxis in History
a) Antiquity
b) The philosophy of praxis

9. Once Again on the Problem of Knowledge and Praxis
a) Materialism and idealism
b) Political and productive praxis

10. The Philosophy of Praxis: two versions

12. Concretisation of the Concept of Praxis
a) Reproduction and communication
b) Use value and sign
c) Marx’s theory of tools
d) Concept of concrete universalism

14. The Concept of Historical Ethos
a) On the term ethos
Translation problems
b) Determination of the concept of ‘historical ethos
c) The concept of modernity
d) The terms ‘realist’, ‘romantic’, ‘classic’, and ‘baroque ethos’
e) The concept of the four ethe of capitalist modernity as a contribution to a materialist history of culture
f) The theoretical positioning and explosive force of the concept of ethos
Form of civilisation versus mode of production (for Martin Heidegger)
The finite of the dominant modernity and of all capitalist modernities (for Karl Marx)
Christianity and capitalism (for Max Weber)
Puritanism and realism

15. The Four Ethe of Capitalist Modernity
a) The realist ethos
b) The romantic ethos
c) The classic ethos
d) The baroque ethos
e) The non-existence of historical ethe in pure form
f) Textual variants of the concept of ethos

17. Utopia: A Non-Capitalist Society of Commodity Producers
Part IV: ON THE RELATIONSHIP BETWEEN PRAXIS AND ETHOS

18. Affirmation or Critique of Praxis?

19. The Conceptual Determination of Culture and Nature

20. The Philosophical Critique of Eurocentrism
a) On the problem of focusing on European authors
b) Critical concept of praxis versus abstract universalism,
namely Eurocentrism

All interested in critical, non-dogmatic Marxism and Critical Theory, and anyone concerned with philosophy coming from outside today’s centers of power, especially Latin America, with a non-Eurocentric perspective.