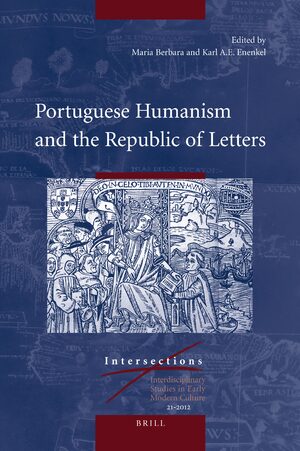 Portuguese Humanism and the Republic of Letters

Series:  Intersections, Volume: 21
Editors: Maria Berbara and Karl A. E.. Enenkel
This volume focuses on the interdisciplinary investigation of Portuguese humanism, especially as a noteworthy player in the international network of early modern scholars, writers and intellectuals. During the Renaissance, Portugal became a centre for the dissemination of information concerning the new geographical and cultural horizons opened up by voyages of discovery, as well as a meeting place for humanist scholars and intellectuals coming from elsewhere in Europe. Papers in this volume situate Portuguese scholarship within the international humanistic network and examine its connection to other aspects of contemporary cultural production.

€116.00$146.00
​
Add to Cart
Maria BERBARA is professor of Art History at the State University of Rio de Janeiro (Brazil). She specializes in Italian and Iberian art history during the Early-Modern period, and her most recent publications include a Portuguese annotaded translation of Michelangelo’s letters as well as several articles on Francisco de Holanda and the artistic exchanges between Italy, Portugal and the New World during the Renaissance.

Karl A.E. ENENKEL is Professor of Medieval and Neo-Latin Literature at the University of Münster, Germany, and member of the Royal Netherlands Academy of Arts and Sciences (KNAW). Formerly, he was professor of Neo-Latin at the University of Leiden, Netherlands. He has published extensively on international Humanism, the reception of Classical Antiquity, the history of ideas, literary genres and emblem studies.