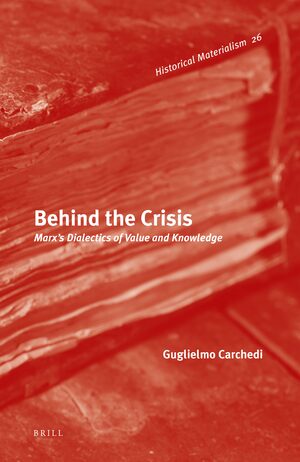 Marx's Dialectics of Value and Knowledge

Author: Guglielmo Carchedi
Much has been written since Capital was first published, and more recently after the demise of the Soviet Union and the consequent triumph of neoliberalism, about the irrelevance, inconsistency, and obsoleteness of Marx. This has been attributed to his unworkable method of inquiry. This book goes against the current. It introduces the issues that are presently most hotly debated, it evaluates them, and it groups them into four headings, each one of them corresponding to a chapter. At the same time, it submits a new reading of Marx’s method of social research and on this basis it argues that Marx’s work offers a solid foundation upon which to further develop a multi-faceted theory of crises highly relevant for the contemporary world.
E-Book (PDF)

€120.00$150.00
​
Add to Cart
Guglielmo Carchedi, doctorate (1965) in Economics, University of Turin, Italy, has worked at the United Nations in New York and has taught at the University of Amsterdam. He is the author of numerous articles and books in several fields of Marxist analysis and research.
"Tackling recent controversies ... Carchedi's reflection, dispelling received ideas about knowledge and contemporary capitalism, evidences the fallacy of post-workerist presuppositions, re-opening the debate on knowledge, the labour process, and value theory." – Marco Boffo, University of London, in: Marx & Philosophy, 2011
Foreword

2. Debates
1. Recasting the issues
2. Abstract labour as the only source of surplus-value
3. The materiality of abstract labour
4. The tendential fall in the average rate of profit
5. The transformation ‘problem’
6. The alien rationality of homo economicus

3. Crises
1. Alternative explanations
2. The cyclical movement
3. The subprime debacle
4. Either Marx or Keynes

References
Index
All those interested in the philosophy of science, epistemology, economic theory, political economy, class analysis, crisis theory and sociology from a broader perspective of Marxist analysis.