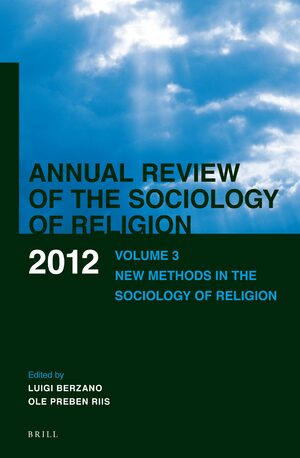 Volume 3: New Methods in the Sociology of Religion (2012)

Volume Editors: Luigi Berzano and Ole Riis
This volume points to methodological innovations in social research and their potential for social scientific studies of religion. Computerization has opened for both quantitative and qualitative systematic analyses of complex materials, and the epistemological discourse after Positivism has opened for reconsidering the foundation of empirical social research. Furthermore religion is changing, and sociology of religion therefore widens its scope by including non-institutional forms of religion. This refocusing calls for new methodological considerations. As the range of available methods expands, it becomes more pressing to consider whether and how methods can be combined, such as quantitative and qualitative methods. Studying religion as a complex social phenomenon calls for a variety of methods, but an integration of the empirical findings points back to the epistemological issue.
E-Book (PDF)

€126.00$156.00
​
Add to Cart
Luigi Berzano is Professor of Sociology of Cultural Processes at the Political Science Faculty of the University of Turin. He is national coordinator of the Scientific Council of Religion Section of the Italian Association of Sociology. Since 1992, he is President of the Center for Studies on New Religions in Turin. His recent publications include: Sociology of Lifestyles, Roma: Carocci 2011 (with C. Genova); “Lifestyles and Religion”, in Annual Review of the Sociology of Religion, n.1, 2010, Brill; “Vocation as a personal choice”, in Giuseppe Giordan, (ed), Vocation and Social Context, Brill, Leiden • Boston, 2007; “Conversion as a New Lifestile: An Exploratory Study of Soka Gakkai in Italy” in Giuseppe. Giordan (ed), Conversion in the Age of Pluralism, Brill, Leiden • Boston, 2009; “Religious Lifestyles”, in Giuseppe Giordan, William H. Swatos (ed), Religion, Spirituality and Everyday Practice, London • New York, Springer, 2011.

Ole Riis is professor of sociology of religion at the Department of Religion, Philosophy and History, University of Agder, Norway. He participates in the Norwegian doctoral school on Religion, Values and Society, where he co-ordinates the regular course on philosophy for science and methodology. He has lectured on research design and methodoogy at several universities and doctoral courses. He has participated in several international research projects based on both qualitative and quantitative methods, such as the Nordic studies of religious changes sine 1938, the European Values Survey and Religious and Moral Pluralism. Beyond studies in sociology of religion, his publication includes several methodological contributions such as texbooks in demography, in applied methods of social research, mixed methods. Several publications have adressed methods for sociology of religion. One of his latest publications, A Sociology of Religious Emotion (w. Linda Woodhead, Oxford University Press 2010) includes an appendix about how the subject may be studied empirically. His most recent publications on methodology addresses criteria of quality in qualitative research. He is presently engaged in issues on epistemology and research design for complex, social problems.

All those interested in methods and theory in the field of sociology of religion and religious studies.