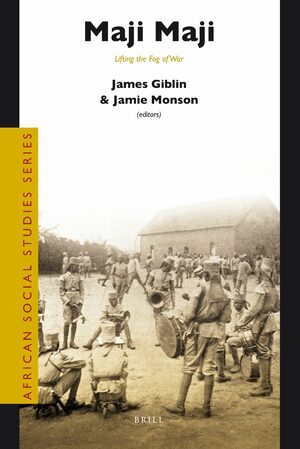 Lifting the Fog of War

Authors: James Giblin and Jamie Monson
The Maji Maji war of 1905-07 in Tanzania was the largest African rebellion against European colonialism. This volume offers the fullest account of the war in the English language. Using oral accounts and little-used documentary evidence, contributors offer detailed histories of districts and localities as well as groups, such as African soldiers in the German army, elephant hunters and women, whose roles in war have been neglected. The contributors examine varieties of communication during wartime, including the circulation of rumor between Africans and Germans. They also offer new insight into the most famous aspect of the war – the use of medicine which was believed to provide invulnerability. The contributors are historians and an archaeologist recognized as authorities on Tanzanian history.
E-Book (PDF)

€75.00$97.00
E-Book (PDF)
Add to Cart
James Giblin is Professor of African History at the University of Iowa. He is author of two books on Tanzanian history, The Politics of Environmental Control in Northeastern Tanzania (1992) and A History of the Excluded (2005).

Jamie Monson is Professor of African History at Macalester College in Saint Paul, Minnesota. She has published extensively on Tanzanian history and on the history of Chinese development assistance to Africa. She is the author of Africa's Freedom Railway: How a Chinese Development Project Changed Lives and Livelihoods in Tanzania (Indiana University Press, 2009)
'This impressive collection of essays attempts to supplement and broader the historical data on this important
event, extending the period of the study of the war to as early as 1902 and as late as 1910, and broadening
the area of conflict far beyond the area earlier studied, most notably far to the west of its purported centre of origins. The new and richly detailed information its contributors provide alters our earlier understanding of the war,
not only in terms of new material, but important in terms of showing how much more complex and varied are the
questions still to be asked about this conflict. Even our understanding of the name of the war is changed.'
T.O. Beidelman in Anthropos 106 (2011)
Scholars and other readers interested in African history (especially East Africa and Tanzania), in anti-colonial movements, in African healing and medicine, in African oral history and in the comparative history of war.