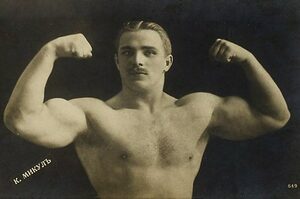 Sports and Physical Culture in Russia continues the new IDC series Mass Culture and Entertainment in Russia. This series comprises collections of unique material about various forms of popular culture and entertainment industry in Tsarist and Soviet Russia. This collection is particularly significant because sports provided opportunities for transitions from tradition to modernity: athletic competition broke down class barriers, brought women into public spaces, and encouraged new modes of behavior and self-presentation.

Topics
This collection offers extraordinary sources for researchers into a variety of topics. The most obvious beneficiary is the sports historian; this discipline profits largely from the scholarly recognition that sports form an essential aspect of any society's culture. Sports are essential to the evolution of the modern personality in terms of health, competitiveness and team play. Tourism, another growth field in academic studies, relates directly to sports. Most significantly, contemporary interest in sexuality is informed by sports periodicals. Not only are gender roles transformed through sports, but the visuals in these publications illustrate emergent feminine and masculine ideals.

Physical Culture and Sports at the Turn of the Twentieth Century
By the turn of the twentieth century, urban Russians found themselves swept up in the "physical culture" movement that had engulfed much of Western Europe. Military conflicts had inspired governments to pay attention to the physical fitness of their populations. Sporting competitions offered a unique forum for the development of a national identity. Imperial expansion also required a combination of physical and psychological superiority that could be enhanced through sports. The rapid industrialization had brought urbanization, which generated anxieties about modernity taking its toll on the human body. Fitness clubs began sprouting up, organizations that brought together members of the emergent middle classes with shared interest in self-improvement. This was complemented by organized athletic competitions. It is this dialectic of individual effort and team spirit that makes sports so valuable as a source for analyzing the transition from tradition to modernity.

Sports played a dynamic role at a moment in Russian history, when a more traditional agrarian society transformed into a modern industrial one. Regulated by clearly articulated rules that were enforced by self-discipline, sports offered an alternative behavior model to the one that was feared by the critics of mass culture. Athletics brought women out in new public spaces, and created opportunities for cooperation among all classes.

Russian Sporting Periodicals
The first journals devoted to sporting activities provided information about horse racing and hunting, especially from the 1870s. The most substantial foundation for change, though, resulted from the rapid industrialization of the 1890s that created the social and economic basis for a middle class. With structured jobs came leisure time and disposable income, even if only modest. Industrialization also brought attention to the stress of modernity on the human organism, which prompted Russians to recognize that their bodies could benefit from a new orientation toward culture, recognition that it was physical as well as intellectual. As middle-class Russians began organizing into clubs, they published small journals that disseminated information. The bicyclists were the first to do this, with Tsiklist. In fact, they were emblematic of the connection between physical culture and modernity: their clubs included women, and met socially in Cyclist Cafés. That their journals became absorbed into other sports-oriented publications tells more about the increase in sports than a decrease in cyclists. Although the majority of periodicals in this collection, such as K sportu! (Let the Games Begin!) and Silai I zdorov'e (Strength and Health), cover all types of sports, journals that focus on individual sports are also included.

Airplanes, Automobiles and Yachts
At first blush these might seem too elitist to be included in a collection designed to provide sources on mass culture. Competitions, however, became extraordinarily popular spectator sports. These periodicals supply information about Russian technological developments, especially the more technical ones, such as Avtomobil'noe delo (Automobile Affairs). But the racing competitions emphasized the sporting aspect, and automobiles became included with other types of sports. When motors could be attached to boats, the notion of the "yacht" became less imperial, more sporty. Moreover, these competitions were often international, which provided a source for national pride that was not restricted to the participants themselves, but spilled over to the fans.

Body Building and Wrestling
One of the most popular individual sports was body building, the quintessence of the physical culture movement. Body building laid the foundation of the physical culture movement because it promoted individual health. As men began to work out together in gyms, body building opened an important homosocial space in modernizing Russia. This helped to improve the status of wrestling, making it more than a circus entertainment. Moreover, wrestlers performed competitively before audiences that also included women. "Professor of Athletics" Ivan Lebedev's Gerkules, 1912-1917, ultimately circulated most widely, and the addition of fiction and history about the sport anchored it in the imagination of the general population. Silai I zdorov'e, 1909-1914, extended the physical culture movement beyond the strictly masculine, and Illiustrirovannyi zhurnal atletika i sport, which can be translated Sports Illustrated, anticipated the contemporary journal familiar to all sports fans.

Football/Soccer
Introduced into Russia by the British managers of several factories, football reflected the modern workplace with its strict regulations and dependence upon co-operation among team members. Playing the game developed physical prowess, which underscored that competition, depended upon athleticism rather than social position. The sport quickly moved beyond the factories; neighborhoods pitched in to purchase balls, and makeshift fields allowed boys around the country to cobble together teams and play with one another, in front of expanding crowds. Today the most popular sport in the world, the football periodicals chart Russia's entrance into competition.

Horse Racing
The "sport of kings," horse racing attracts the most viewers because of the attraction of legalized gambling on the outcome. Among all sports, horse racing had by far the most periodicals devoted to it because of the racing forms that published the lists of "favorites" on the eve of race days. The selected periodicals included here recreate the aura of the hippodrome, where although the prices for seating separated spectators according to social class, the enthusiasm for the thoroughbreds brought all together in spirit. The Russian penchant for gambling is well known, and these publications provide a flavor missing in the sociological tracts that condemn this vice.

Skating
Skaters took to the ice and to the roller rinks. They competed against each other and played together. Propriety permitted men to hold women in their arms, purportedly in order to maintain their balance. Skating improved athleticism, and was also the most social of sports. Roller rinks were also the site of several sexual scandals, because the paid instructors sometimes doubled as "Alfonses," or paid male escorts. Such journals as Obozrenie kinematografov, sketing-ringov, uveselenii I sporta (Review of Cinema, Skating Rinks, Entertainment, and Sports) locate skating at the center of a variety of entertainments, whereas K sportu! and Vestnik sporta (The Sporting Herald) emphasize the national and international competitions.

Tourism: Bicycling and Mountain Climbing
Sports also provided impetus to the boom in commercial tourism at the turn of the century. If the great social advantage of bicycles was that they provided a comparatively inexpensive means of individualized transportation, cycling was also fun and quickly developed into a competitive sport. The combination of fun and transportation turned cycling into a medium for touring, as is evident from the fact that around 1900 local cycling clubs started renaming themselves "tourist" and sponsoring members on local tours. Mountain climbers, although obviously less widely dispersed than bicycling, also began forming clubs and organizing tourist activities. These periodicals are important to studying tourism, and how this developed into nationalism. Tsiklist (The Cyclist), a cycling journal, 1895-1904, integrated cycling with other sports, just as Russkii turist (The Russian Tourist), 1899-1913, brought related athletic activities into tourism.