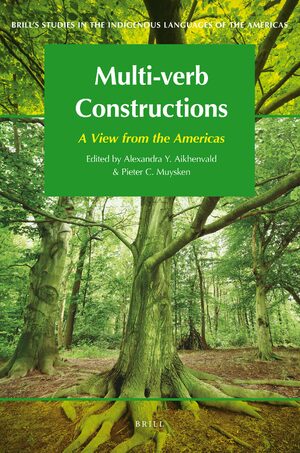 A View from the Americas

Editors: Alexandra Aikhenvald and Pieter Muysken
One of the most complex topics in the study of the indigenous languages of the Americas, and indeed in the study of any language set, is the complex behaviour of multi-verb constructions. In many languages, several verbs can co-occur in a sentence, forming a single predicate. This book contains a first survey of such constructions in languages of North, Middle, and South America. Though it is not a systematic typological survey, the combined insights from the various chapters give a very rich perspective on this phenomenon, involving a host of typologically diverse constructions, including serial verb constructions, auxiliaries, co-verbs, phasal verbs, incorporated verbs, etc. Aikhenvald's long introduction puts the chapters into a single perspective.
E-Book (PDF)

€131.00$163.00
​
Add to Cart
Alexandra Y. Aikhenvald, Ph.D. (1984) in Linguistics, Academy of Science of the USSR, Doctor of Letters (2006), La Trobe University, Australia, is Professor and Research Leader (People and societies of the tropics) at Cairns Institute, James Cook University, Australia. She has published extensively on Amazonian languages, languages of New Guinea , linguistic typology, and language contact. Her major publications include Evidentiality (2004),and Imperatives and Commands (2010) (OUP).