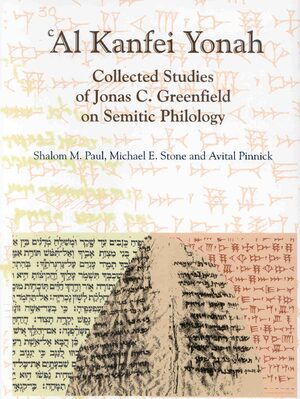 AutorIn: Michael Stone
HerausgeberInnen: Shalom Paul und Avital Pinnick
These volumes contain most of the papers of the late Jonas C. Greenfield written in English, with source and lexeme indexes, and is intended for scholars and students of the Ancient Near East, Aramaic, Hebrew Bible, Dead Sea Scrolls, and Semitic philology. Greenfield published numerous articles in a wide range of journals, some of them fairly inaccessible. He himself had begun to collect his papers, with the aim of revising and republishing them, when his sudden death intervened. It is the privilege of the editors, two close friends of Greenfield and one of his former students, to present this collection to the public. This collection shows the wealth, breadth, and creativity of Greenfield’s substantial scholarship, as well as his desire to collaborate with his colleagues in academic pursuits.

Prof. Jonas C. Greenfield was born in New York City in 1926 and completed his Ph.D. at Yale University in 1956. In addition to a distinguished teaching career that spanned nearly two and a half decades at the Hebrew University of Jerusalem, he was a member of the team of translators of the Jewish Publication Society and of the Dead Sea Scrolls Supervisory Committee of the Israel Antiquities Authority, an honorary fellow of the Royal Danish Academy of Sciences and Letters and the Royal Asiatic Society; in 1994, he was elected to the Israel Academy of Sciences and Humanities. He died unexpectedly in his sleep in 1995. Jonas was distinguished by his love of learning and his high regard for his colleagues and students--the values by which he lived as a man and a scholar.
Festeinband