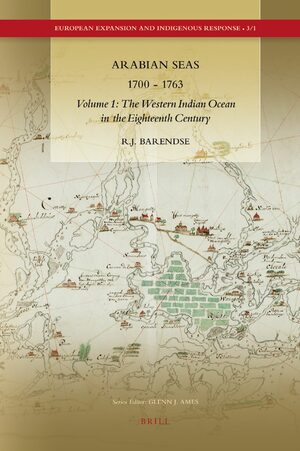 Author: Rene Barendse
The Western Indian Ocean in the Eighteenth Century is the first of four volumes offering a sweeping panorama of the Arabian Seas during the early modern period. Focusing on the period 1700-1763, the first volume concentrates on daily life in littoral societies, examining long term issues including climatic change, famine, and the structures of fishing communities. The volume examines littoral societies in each of the major coastal areas of the Western Indian Ocean: East Africa, the Red Seas, the Persian Gulf, and its traditional ties to surrounding hinterlands as well as to the west coast of India. While having particular interest to readers concerned with Indian Ocean history, as an absorbing and innovative account of a much neglected albeit critical area and period, Arabian Seas, 1700-1763 will be of great interest to anyone interested in early modern maritime, social, or economic history.

Kings, Gangsters, and Companies, volume two of Arabian Seas, 1700-1763 focuses on European relations with the major states and societies of the Western Indian Ocean during the eighteenth century. As such, it traces the major structural changes in African, South Asian, and Middle Eastern societies during this period. Chapters examine European communities and their relations with the societies of the Indian Ocean basin, the daily life of European soldiers and merchants, relations with Indian women, European views on the Indian caste system as well as the governmental systems they encountered. The volume also details the importance of Indian and Persian merchant communities in the Indian Ocean trading system and the impact of war on the economic development of this system during the eighteenth century.

Men and Merchandise, the third volume of Arabian Seas, 1700-1763, provides a detailed examination of the economic and social structures in the Western Indian Ocean focusing on key commodities like bullion, textiles, and the slave trade. Readers will also encounter interesting vignettes of daily life: an Indian nautch girl worried about her inheritance, a Portuguese gangster-friar and pariah workers, the infamous buccaneers of Madagascar, coffee-traders from Yemen, Cairo, and the Crimea, and Iraqi and Iranian bankers who all had relevance to this vast economic system. Men and Merchandise provides insights into other traditionally ignored aspects in the traditional historiography including uprisings aboard slave ships, and details of maroon societies involving refugee slaves in India and Mauritius as well as Dutch slave soldiers in the Persian Gulf. As such, it will prove of great interest to any reader concerned with the social and economic history of the Indian Ocean basin.

Europe in Asia, the fourth volume and final volume in Arabian Seas, 1700-1763, details the early phase of European territorial empire building in the western Indian Ocean basin. Particular attention is given to the much neglected history of the Portuguese Estado da India and the attempts of the Portuguese Crown to reform its administration and dwindling possessions in the eighteenth century. The volume examines the direct legacies of the longstanding Portuguese imperial presence in the Arabian Seas, including the experiences of Indian Catholic communities as well as the establishment of Indian settlements and communities in East Africa. Finally, the volume provides an exhaustive treatment of the structures and history of the Dutch East India Company (VOC) and English East India Company (EIC), the establishment of the vast private country trade of the EIC, and the reasons for the relative decline of the VOC and the rise of English power in the region during the eighteenth century.
E-Book

€591.00$734.00
​
Add to Cart
Rene Jan Barendse, (PhD 1990) in history, University of Leiden, lately fellow of the Dutch Academy of Science, has published extensively on the history of the Indian Ocean including Arabian Seas: the Indian Ocean World of the Seventeenth Century (M.E. Sharpe, Armonk, 2001)
Abbreviations
Preface

Conclusion to Part One
Illustrations to volume 1


VOLUME 2
KINGS, GANGSTERS AND COMPANIES
6. Europeans among Asians
6.1 The European Nation
6.2 “Becoming Somebody in the World”
6.3 Women
6.4 Ranking Servants and Rank and File
6.5 Portuguese Catholics beyond the Limits
6.6 Conclusion
7. Asians among Europeans
7.1 Insiders and Outsiders
7.2 European Visions of Asia and Africa
7.3 Kerala: The ‘Traditional’ System
7.4 The Europeans and the Caste System
8. Indian Merchants
8.1 Markets and Circulation
8.2 Peasants, Banjaras, and Bazaars
8.3 The Middling Sort
8.4 Hindu Capitalism
8.5 Conclusion
9. Kings and Gangsters. War and the Economy
9.1 Decline or Prosperity? Iran and the Ottoman Parallel
9.2 War and the Economy in Iran
9.3 War and the Economy: India


VOLUME 3
MEN AND MERCHANDISE
10. Prices and Money
10.1 The Demand for Silver in India
10.2 The Supply of Money
10.3 East Africa
11. Chapter Eleven Labor and Production: Indian Textiles
11.1 The Demand for Textiles: Europe and Africa
10.2 Textiles on East Africa’s Currency Interface
10.3 The Demand for Textiles: India
10.4 The Production of Textiles
10.5 The Market for Skilled Labor
10.6 Forced Labor, Servitude, and the Koeli beast
12. Slavery and Slave Trades
11.1 The Problem of Slavery in the East Indies
11.2 The Status of Slaves: Slavedom and Bondage
12.3 The Traditional Slave Trades of the Arabian Seas
12.4 Madagascar and the New Slavery
12.5 Mozambique and the New Slavery
Conclusion to Part Three
Illustrations to volume 3


All those interested in the economic and social history of the early modern world and historians of colonialism, South Asia, Iran and Africa in particular.