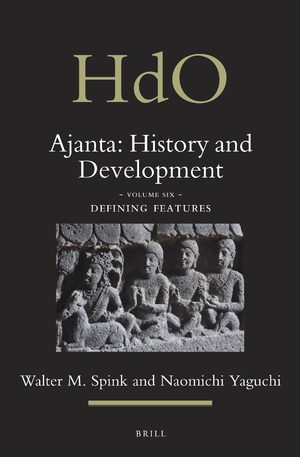 Series:  Handbook of Oriental Studies. Section 2 South Asia, Volume: 18/6 and  Ajanta: History and Development, Volume: 18/6
Author: Walter Spink
Volume 6, in Walter Spink's detailed analysis of the creation and development of the Ajanta caves, during the reign of the emperor Harisena (c.460-c.477) has had a profound and often upsetting impact on the understanding of Indian history in the so-called Golden Age. The author contends that through the discipline of Art History one can in fact change the established view of cultural developments in the crucial "Classic Age" (5th Century CE). One of his major aims is to prove that it was the Vakatakas, under the emperor Harisena, and not the Guptas, that brought Indian culture to its apogee in the late 470s and to show that by analyzing and organizing Ajanta's "defining feature" in revealing developmental sequences, one can support, with specifics, the revolutionary (but now increasingly accepted) "short chronology" for which the author is well known. These "defining features" range from the changing types of Buddha images and living arrangements for the monks, to the precise analysis of the evolution of pillars, doorways, and excavation techniques. The volume also includes, at the start, a discussion of the transforming effect of competition, and finally war, as a key to Ajanta's highly driven development, its florescence, and finally its sad demise.
E-Book (PDF)

$208.00
​
Add to Cart
Walter M. Spink, Professor Emeritus of Indian Art at the University of Michigan received his PhD from Harvard University in 1954. His chief interest has entered upon the Ajanta caves in India, where he had spent many years, with support from Bollingen, Guggenheim, Fulbright Foundations, NEH, and AIIS for his Ajanta: History and Development (Brill).
Naomichi Yaguchi, Associate Professor, Kanazawa University, Japan, has taken all of the photographs for, and has been actively involved in discussions about the volume.
"there is no doubt that his work represents a huge contribution to the understanding of the site. (...) certainly the most detailed study of the making of the caves ever conducted."
William Dalrymple, New York Review of Books (October 2014)
Scholars interested in India's Classic Age and the surprising major role played by the Ajanta caves, through the discipline of art history, for a drastic revision of Indian history in the fifth century.