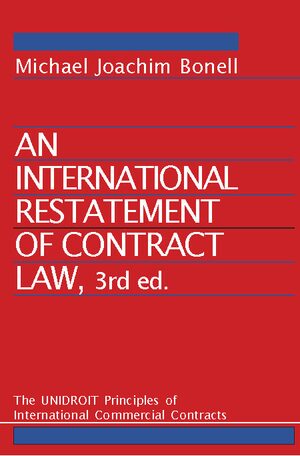 Author: Michael Joachim Bonell
The Unidroit Principles of International Contracts, first published in 1994, have met with extraordinary success in the legal and business community worldwide. Prepared by a group of eminent experts from all major legal systems of the world, they provide a comprehensive set of rules for international commercial contracts. Available in more than 20 language versions, they are increasingly being used by national legislatures as a source of inspiration in law reform projects, by lawyers as guidelines in contract negotiations and by arbitrators as a legal basis for the settlement of disputes. In 2004 a new edition of the Unidroit Principles was approved, containing five new chapters and adaptations to take into account electronic contracting.

This new edition of An International Restatement of Contract Law is the first comprehensive introduction to the Unidroit Principles 2004. In addition, it provides an extensive survey and analysis of the actual use of the Unidroit Principles in practice with special emphasis on the different ways in which they have been interpreted and applied by the courts and arbitral tribunals in the hundred or so cases reported worldwide. The book also contains the full text of the Preamble and the 180 articles of the Unidroit Principles 2004 in Chinese, English, French, German, Italian and Russian as well as the 1994 edition in Spanish.

€177.00$221.00
​
Add to Cart
Michael Joachim Bonell was the Chairman of the Working Group entrusted with the preparation of the UNIDROIT Principles 2004. He is Professor of Law at the University of Rome I “La Sapienza” and Consultant at UNIDROIT.