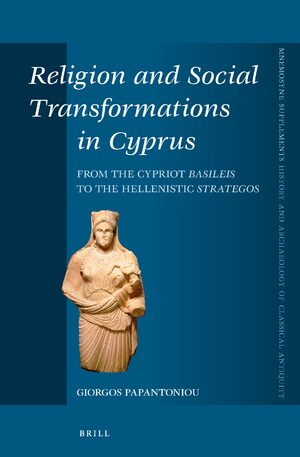 Religion and Social Transformations in Cyprus

From the Cypriot Basileis to the Hellenistic Strategos

Series: Mnemosyne, Supplements, Volume: 347and Mnemosyne, Supplements, History and Archaeology of Classical Antiquity, Volume: 347
Auteur : Giorgos Papantoniou
This monograph focuses on religion to explore how the socio-cultural infrastructure of Cyprus was affected by the transition from segmented administration by many Cypriot kings to the island-wide government by a foreign Ptolemaic correspondent. It approaches politico-religious ideological responses and structures of symbolism through the study of sacred landscapes, specific iconographic elements, and archaeological contexts and architecture, as well as through textual and epigraphic evidence. A fresh approach to the transition is put forward, connecting the island more emphatically with its longue durée. Moving beyond the field of Cypriot studies, this work also serves as a paradigm for the study of religion in relation to social power in other fields of classics and, in particular, for the enrolment of other areas of the Mediterranean into the political and cultural Hellenistic oikoumene.
E-Book (PDF)

From  243,00 $
​
Add to Cart
Giorgos Papantoniou, Ph.D. (2008) in Classics, Trinity College Dublin, is currently a Government of Ireland Postdoctoral Fellow at Trinity College Dublin. He has published extensively on Cypriot Iron Age city-kingdoms, Hellenistic Cyprus, and Cypriot sanctuaries and religion.
"The volume emphasises the particularity of the Cypriot case but at the same time does not reduce its significance for an understanding of the wider Hellenistic world. The story of the transition from Basileis to Strategos in Cyprus should not be seen merely as a case study but as a model for understanding ‘hellenisation’ per se. As such, this well-argued and richly illustrated volume will be of real value to those interested in cultural transformations and in the process of Hellenisation within and beyond Cyprus." – Jennifer Webb, in: The Ancient History Bulletin Online 3 (2013)
"This work is an unusual and welcome addition to the literature on Hellenistic Cyprus, approaching the transition to Ptolemaic rule on the island from an archaeological perspective and via an integrated methodology that is much more common in studies of pre-/proto-historic periods than those of such a relatively late historical period as the Hellenistic. This novel approach [...] provides an important new framework for understanding social change and continuity during a period of historically attested political upheaval. [...] Papantoniou is to be congratulated on producing a well-illustrated volume that gives a genuinely new perspective on the Cypriot Hellenistic era, and his research will be an important addition to the literature on this period." – Philippa M. Steele, in: BMCR, 2013.08.07
All those interested in Cyprus from the Late Bronze Age to the Roman period, as well as those working on other Mediterranean and Near Eastern regions; archaeologists, historians and classicists working on imperialism, social change, religion and cultural identity.