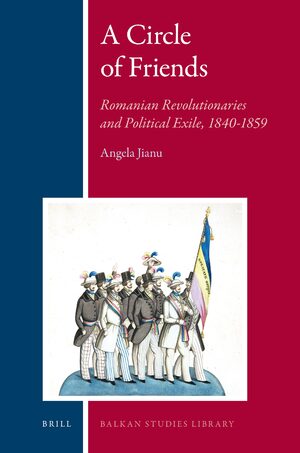 A Circle of Friends

Author: Angela Jianu
Angela Jianu explores the lives and activities of a group of Romanian revolutionaries exiled in Paris, London and the Middle East in the aftermath of the insurrections of 1848. Drawing largely on diaries, memoirs and private correspondence, A Circle of Friends is a social history of political exile, presenting the personal life dramas of the protagonists within the wider context of the European post-revolutionary turmoil of the 1850s. Exile and political repression allied this group not only to their Hungarian and Polish peers, but also to French republicans, English radicals and Italian freedom-fighters. Their story reveals the existence of transnational networks of left-wing, radical and republican movements in mid-nineteenth-century Europe against the background of nation-building projects in East-Central Europe.
E-Book

€132.00$164.00
​
Add to Cart
Angela Jianu has a PhD in history from the University of York (UK, 2004) and teaches modern European history at the Centre for Lifelong Learning (University of Warwick, UK).
"Jianu has realized the need for a large work of synthesis, which not only removes the ideological gloss from the story of revolutionary exile but, at the same time, provides a reference work for international historiography, thereby enriching the study of those global struggles for freedom […] Jianu’s book restores Romanians to their correct place in the international democratic movement which radically changed the face of contemporary Europe, heralded the end of ancien régime societies and laid the basis for the spiritual and political renewal of the entire continent."


"Angela Jianu's book is a brilliant solution to the question of retelling the story of the 1848 revolutionaries, with the merit of contextualizing a considerable mass of documents up until now largely neglected by scholars [...] Angela Jianu's book is a refreshing inquiry into the background of major historical events, illuminating their causes and hidden motivations."


"This volume extensively evaluates the correspondence, the memoirs, and the press of the time to highlight, often from a new perspective, the process of emancipation, the emerging pro-European orientation of the top Romanian revolutionaries, the integration of the so-called Oriental quest and of the Romanian issue into the larger framework of Europe [...] Jianu paints a graceful historical picture, renarrating the political facts through the biographies of the main Romanian actors during the decades of revolution and exile that preceded the union of the two principalities. Intended for an academic audience, this work would also be accessible to a public eager to learn more about the history of Romania."

"[...] the fate of the revolutionaries of 1848 has been little studied so far; more often than not, history ‘ended’ with ‘the failure of the Revolution’; [...] the revolution was over only for some, and exile continued to engage an entire generation in a common pursuit of ideals. In A Circle of Friends [...] Angela Jianu reconstructs in detail the cosmopolitan world of the 1840s, in which the exiles continued their search for ‘revolutionary freedom’ abroad. [...] This well- written, dense study will undoubtedly benefit many generations of historians."

Constanţa Vintilä-Ghitulescu, Nicolae Iorga Institute of History. In Dilema Veche, 401.
All those interested in the history of East-Central Europe, the history of European liberalism and of the European left, as well as in Freemasonry, women's history, political biography and transnational exilic experiences.