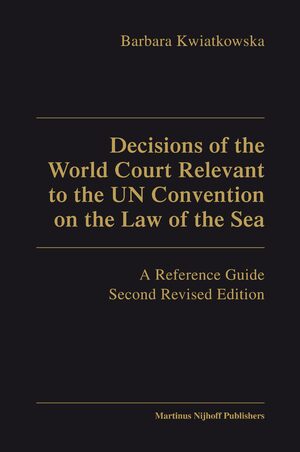 Author: Barbara Kwiatkowska
This pioneering publication provides a Reference Guide to the significant contributions of decisions of the World Court, as the principal judicial organ of the United Nations and the world's most senior Court with the broadest material jurisdiction, to the development of the law of the sea as a part of the global system of peace and security. The Guide is dedicated to the Court's former President Stephen M. Schwebel in appreciation of his belief that it is important for the Court to further explore its pre-eminently unique role throughout the Third Millennium.
Whereas the format of specific entries covered by this Reference Guide largely corresponds to the Parts and Annexes of the 1982 UN Law of the Sea Convention (UNCLOS) and the 1994 Part XI Agreement, the heading of each entry also contains, as appropriate, references to the 1930 League of Nations Hague Draft, the four 1958 UN Geneva Conventions and the 1995 UN Straddling Stocks Agreement, as well as to the 1972 UN Stockholm, the 1992 Rio UNCED and the 2002 Johannesbourg instruments. This will enable the reader to relate the Court's decisions to the respective UNCLOS provisions as originated from and as implemented by these global framework instruments at various stages of codification and progressive development of the law of the sea.
The entries cover principally Judgments and Orders (including the related pleadings) of the PCIJ and the ICJ and those decisions of Arbitral Tribunals and other third party fora as well as national courts which have been relied upon in the Court's jurisprudence. In addition, the recent decisions of the ITLOS and some other fora, such as the Annex VII Southern Bluefin Tuna, Singapore v. Malaysia, Barbados/Trinidad and Tobago, Guyana/Suriname and the Mox Plant Arbitral Tribunals, as well as references to treaties are also listed under specific entries as appropriate. Tables of Cases and Treaties will importantly facilitate the use of this Reference Guide. It has proven to be an indispensable tool for the Judges and governmental and other practitioners in furthering the coherent development of the law of the sea by international courts and tribunals on the one hand, and for international community of academics in the adequate assessing of this development on the other hand.