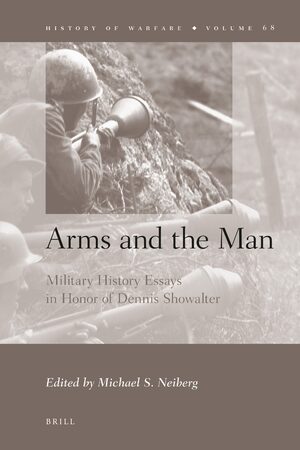 Arms and the Man

Volume Editor: Michael S. Neiberg
These essays honor Dennis Showalter, a pioneer in the field of military history and a mentor to an entire generation of scholars. The essays themselves are written by some of the best-known and most highly-respected scholars in the field. They span the globe and cover a wide range of military history topics from the ancient world to the present day. As a group, this book represents not only a collection in honor of a great scholar, but a collection of some of the highest-quality cutting-edge scholarship in the field today. It will be of interest to anyone who wants to understand the history of warfare.
Contributors are William J. Astore, Mary Kathryn Barbier, Jeremy Black, Robert M. Citino, Kelly DeVries, Richard L. DiNardo, Robert A. Doughty, Holger H. Herwig, Eugenia C. Kiesling, Robert McJimsey, Michael S. Neiberg and Dennis Showalter.
E-Book (PDF)

€133.00$165.00
​
Add to Cart
Michael S. Neiberg, Ph.D. (1996 ) in History, Carnegie-Mellon University, is Professor of History at University of Southern Mississippi. He has wide-ranging publications on World War I, most notably Fighting the Great War: A Global History (Harvard, 2005).
List of Contributors ...vii

Readership will include scholars in the field of military history, including professors and graduate students, who study a full range of time periods and topics.