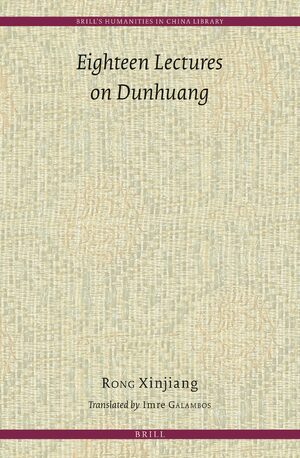 Author: Xinjiang Rong
Translator: Imre Galambos
In Eighteen Lectures on Dunhuang, Rong Xinjiang provides an accessible overview of Dunhuang studies, an academic field that emerged following the discovery of a medieval monastic library at the Mogao caves near Dunhuang. The manuscripts were hidden in a cave at the beginning of the 11th century and remained unnoticed until 1900, when a Daoist monk accidentally found them and subsequently sold most of them to foreign explorers and scholars. The availability of this unprecedented amount of first-hand material from China’s middle period provided a stimulus for a number of scholarly fields both in China and the West. Rong Xinjiang’s book provides, for the first time in English, a convenient summary of the history of Dunhuang studies and its contribution to scholarship.

€207.00$250.00
​
Add to Cart
Rong Xinjiang 榮新江 is a Professor at the Department of History and Director of Center for the Study of Ancient Chinese History, Beijing University. His main research interests include China's cultural contacts with the outside world during the Han-Tang period, the Silk Road (overland and maritime), the history of the Sui and Tang dynasties, and the history of Central Asia. In addition to numerous Chinese publications, he has also published a series of articles in Western languages. He has been the editor of the Journal of Tang Studies since 1995.

Imre Galambos, Ph.D. (2002), UC Berkeley, is University Lecturer in Chinese at the University of Cambridge. He specializes in Chinese manuscript culture, with a particular emphasis on Dunhuang. His new book Manuscripts and Travellers (deGruyter, 2012) came out last year.
Introduction
1. What is “Dunhuang Studies”?
2. The Current State of Affairs in Dunhuang Studies
3. Objectives and Difficulties in Dunhuang Studies: The Case of the History of the Guiyijun
4. Summary of This Book

Lecture 4 The Nature of the Dunhuang Library Cave and the Reasons for its Sealing
1. The Original Collection
2. Monastic Collections in Dunhuang during the Guiyijun Period
3. The Types of Materials in the Cave Library
4. The Reasons for the Sealing

Lecture 9 The Political and Economic History of the Sui, Tang and Five Dynasties in Light of Dunhuang Studies
1. The System of Official Correspondence
2. Administrative and Legal Institutions
3. Military System
4. The Institutions of Juntian and Corvée Labor
5. Political History

Lecture 10 Dunhuang Studies and the Social History of the Medieval Period
1. Population and Family
2. Aristocratic Clans and Grassroots Society
3. Buddhist Communities and the Life of the Clergy
4. Folklore Material among the Dunhuang Manuscripts

Lecture 11 The History of Central Asian Peoples and China’s Contacts with Her Neighbors in Light of Dunhuang Studies
1. The Tibetans
2. Dunhuang under Tibetan Rule
3. The Spread of Chan Teachings to Tibet and Sino-Tibetan Cultural Contacts
4. The Ganzhou and Xizhou Uighurs
5. The Kingdom of Khotan
6. Sogdian Colonies
7. The Three Foreign Religions
8. Records of Buddhist Pilgrims

Lecture 16 Dunhuang in Light of Art and Archaeology
1. Types of Caves and their Artistic Style
2. Sculpture
3. Dunhuang Murals
4. Decorative Patterns in the Caves
5. Other Cave Complexes besides the Mogao Caves

Lecture 17 Dunhuang and Manuscript Studies
1. Paper and Layout
2. Dating Based on Calligraphy
3. Relationship between the Manuscripts’ Recto and Verso

All interested in the history of the Silk Road and Dunhuang, China's contacts with the West, and those working on topics related to Dunhuang manuscripts. In general, undergraduates in the field of Chinese studies should also read it.