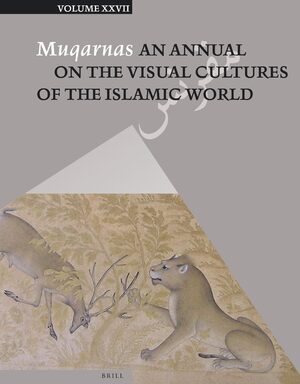 Editors: Gülru Necipoğlu and Karen Leal
Muqarnas: An Annual on the Visual Cultures of the Islamic World is sponsored by the Aga Khan Program for Islamic Architecture at Harvard University and the Massachusetts Institute of Technology, Cambridge, Massachusetts.

The articles in Muqarnas 27 address topics such as spolia in medieval Islamic architecture, Islamic coinage in the seventh century, the architecture of the Alhambra from an environmental perspective, and Ottoman–Mamluk gift exchange in the fifteenth century. The volume also features a new section, entitled “Notes and Sources”, with pieces highlighting primary sources such as Akbar’s Kathāsaritsāgara.

€49.00$63.00
​
Add to Cart
Gülru Necipoğlu, (Ph.D., Harvard University, 1986) is the Aga Khan Professor of Islamic Art and Architecture at Harvard University. She has been the editor of Muqarnas since 1993.
CONTENTS

Jere L. Bacharach, Signs of Sovereignty: The Shahāda, Qurʾanic Verses, and the Coinage of ʿAbd al-Malik
Rina Avner, The Dome of the Rock in Light of the Development of Concentric Martyria in Jerusalem: Architecture and Architectural Iconography
Kathryn Blair Moore, Textual Transmission and Pictorial Transformations: The Post-Crusade Image of the Dome of the Rock in Italy
Alicia Walker, Middle Byzantine Aesthetics of Power and the Incomparability of Islamic Art:
The Architectural Ekphraseis of Nikolaos Mesarites
Julia Gonnella, Columns and Hieroglyphs: Magic Spolia in Medieval Islamic Architecture of
Northern Syria
Elizabeth A. Lambourn, A Self-Conscious Art? Seeing Micro-Architecture in Sultanate South Asia
Todd Willmert, Alhambra Palace Architecture: An Environmental Consideration of Its Inhabitation
Elias I. Muhanna, The Sultan’s New Clothes: Ottoman–Mamluk Gift Exchange in the Fifteenth Century
Persis Berlekamp, The Limits of Artistic Exchange in Fourteenth-Century Tabriz:
The Paradox of Rashid al-Din’s Book on Chinese Medicine, Part I
Zeynep Tarım ErtuĞ, The Depiction of Ceremonies in Ottoman Miniatures: Historical Record or
a Matter of Protocol?
Ebba Koch, The Mughal Emperor as Solomon, Majnun, and Orpheus, or the Album as a Think Tank
for Allegory

Heike Franke, Akbar’s Kathāsaritsāgara: The Translator and Illustrations of an Imperial Manuscript
Vincenza Garofalo, A Methodology for Studying Muqarnas: The Extant Examples in Palermo
Fabrizio Agnello, The Painted Ceiling of the Nave of the Cappella Palatina in Palermo:
An Essay on Its Geometric and Constructive Features

Those interested in the visual culture of the Islamic world, as well as Byzantinists, Europeanists, medievalists, historians of the early modern era, and historians of southeast Asia.