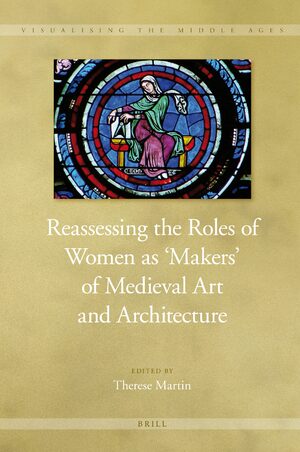 Volume Editor: Therese Martin
These volumes propose a renewed way of framing the debate around the history of medieval art and architecture to highlight the multiple roles played by women. Today’s standard division of artist from patron is not seen in medieval inscriptions—on paintings, metalwork, embroideries, or buildings—where the most common verb is 'made' ( fecit). At times this denotes the individual whose hands produced the work, but it can equally refer to the person whose donation made the undertaking possible. Here twenty-four scholars examine secular and religious art from across medieval Europe to demonstrate that a range of studies is of interest not just for a particular time and place but because, from this range, overall conclusions can be drawn for the question of medieval art history as a whole.
Contributors are Mickey Abel, Glaire D. Anderson, Jane L. Carroll, Nicola Coldstream, María Elena Díez Jorge, Jaroslav Folda, Alexandra Gajewski, Loveday Lewes Gee, Melissa R. Katz, Katrin Kogman-Appel, Pierre Alain Mariaux, Therese Martin, Eileen McKiernan González, Rachel Moss, Jenifer Ní Ghrádaigh, Felipe Pereda, Annie Renoux, Ana Maria S. A. Rodrigues, Jane Tibbetts Schulenburg, Stefanie Seeberg, Miriam Shadis, Ellen Shortell, Loretta Vandi, and Nancy L. Wicker.
E-Book (PDF)

€254.00$315.00
​
Add to Cart
Therese Martin (Ph.D., 2000, Art History, University of Pittsburgh) holds tenure at the Consejo Superior de Investigaciones Científicas, Madrid. Her research centers on women’s sponsorship of medieval art, Romanesque architecture, and royal palaces. With Brill, she previously co-edited Church, State, Vellum, and Stone (2005) and authored Queen as King (2006).
"...A marker of the shared enterprise of the contributors to this volume was their formation of the common goal, that of producing a work that was not simply an accumulation of evidence for feminine agency in the making of medieval art, but a step towards an understanding of the way the study of women as “makers” can produce meaning, and be understood in the larger context of making art in the Middle Ages. At the heart of this project is, then, a shared understanding that, in Martin’s words: conceiving, founding, paying for and fabricating a work of art or architecture were all recognized in the Middle Ages as something that today we would equate with creativity… The result –24 articles in two weighty, lavishly documented and illustrated volumes– demonstrates a lively variety of approaches to the study of female agency in the arts… To bring together these scholars and their work was a formidable challenge, and Martin has brought us a valuable reference that enriches our understanding of the whole of Medieval Art."
Jerrilynn Dodds, Anuario de Estudios Medievales 44/1 (2014)

“...Incorporating a dazzling array of subjects and approaches, and ranging across Jewish, Christian, Viking, and Islamic Europe, as well as the Kingdom of Jerusalem, the twenty-four essays gathered here demonstrate the richness of medieval women’s artistic activities, establishing beyond any doubt the centrality of women to the history of art… The richness of these two volumes can hardly be addressed in a short review. The breadth of subjects, analytical rigor, and methodological reach are witness to the richness of scholarship on medieval women and art, and a testament to the editorial guidance of Therese Martin, whose introduction establishes clear questions and interpretative themes as parameters for the volume as a whole… Reassessing the Roles of Women as ‘Makers’ of Medieval Art and Architecture is an ambitious collection that will be welcomed by scholars of art, history, religion, and women’s studies, as well as by interested general readers, who will find in its two volumes much to ponder, delight, and surprise."
Fiona Griffiths, Studies in Iconography, vol. 35 (2014).

"Therese Martin rightly notes in her introductory essay that the history of medieval art to date is largely a history of men. Art and architecture has been seen as being made by and for men, with masculine status routinely assigned to all unascribed works. This vast and highly scholarly collection of essays and illustrations seeks to restore women’s important presence to the history of art...The erudition of the collection is admirable, and several of the essays are certainly worthy of being expanded into monographs. They offer an energetic engagement with gender issues alongside the deepest analysis of a large number of works and their “makers.” A vast bibliography, useful indices and nearly 300 fine color and black-and-white illustrations add to its value, which is unlikely to surpass in a generation. “Anonymous” will indeed no longer be presumed to be male."
Lesley Pattinson, Sixteenth Century Journal, 44/4 (2013): 1089-1091

"That this collection and its individual contributions have stimulated a review of this length [15 pages] is a testament to their value, interest, and quality. But it is not enough either to praise the authors for their service to the discipline in contributing such fine, thoughtful essays, nor to laud Martin for conceiving this project and shepherding it through to publication. Through their sustained emphasis on and attention to women’s artistic agency, Martin and her contributors have challenged us to conceive medieval art and architecture through a fundamentally different lens, one that naturalizes women’s contributions to and participation in their ‘making’. In this, Reassessing the Roles of Women as ‘Makers’ of Medieval Art and Architecture is a milestone not only in the study of medieval women in art history, but also in medieval art history tout court. Now that Martin and her authors have thrown down the gauntlet, are medievalists ready to take it up?"
Kathryn A. Smith, Journal of Art Historiography, number 9 (December 2013): 1-15; http://arthistoriography.files.wordpress.com/2013/12/smith-rev.pdf

“ Reassessing the Roles of Women as “Makers” of Medieval Art and Architecture, edited by Therese Martin, makes a substantial contribution to the literature on women’s involvement in medieval artistic production…The essays collectively challenge a range of assumptions about medieval women’s roles in processes of artistic production… In focusing on women as the “makers” of medieval art, the essays treat women as both artists and patrons and consider the relationship between those two roles.”
Marian Bleeke, Medieval Feminist Forum, 49.1 (Summer 2013)"

The contributions "...collectively mark a valuable addition to scholarship on women as artists and patrons of medieval art, above all, in their emphasis on neglected topics such as women as patrons of architectural projects and women as artists at the periphery of western Europe, i.e. in the Iberian peninsula, Ireland, Scandinavia, and the Holy Land. ... The colour plates and black and-white figures provide a treasure trove of unfamiliar material, of which surely one of the most extraordinary is the jagged, irregular fourteenth-century reliquary of the Holy Cross, perhaps a pastiche made of silver and coral and bearing the arms of Aragon and Portugal, which is connected to the patronage of Isabel, daughter of Pere III of Aragon and Constanza Hohenstaufen. This and many other remarkable objects discussed here deserve to enter the mainstream of art history..."
Jeffrey F. Hamburger, Medium Aevum vol. 82, issue 1, p. 179 (Spring-Summer 2013).

"...It is a useful handbook for those who have never dealt with the subject because it gives an overview of the role of women in art production in the middle ages. And for the experienced researcher it gives a collection of female roles he needs to be aware of when approaching any new object because information on gender of the artist/patron or the related prejudice can have significant impact on the interpretation of any work of art..."
Silvija Juraic, Hortus Artium Medievalium, Vol. 19, May 2013

"...These two volumes, beautifully illustrated, are divided into the following parts: 1. display and concealment; 2. ownership and community; 3. collaboration and authorship; 4. family and audience; 5. piety and authority; and memory and motherhood… Every author has researched his or her topic to a great extent; these are not short and quickly written conference papers. The editor deserves great recognition for her stewardship in getting these volumes to the point where they are, representing excellent, up-to-date scholarship on this cutting-edge topic… Altogether, these two volumes represent an important milestone in research on medieval artists and patrons."
Albrecht Classen, Mediaevistik 25 (2012)

Bibliography 989
Index of People 1069
Index of Places 1091
Index of Subjects 1100
In addition to specialists in art history, gender studies, and women’s history, this volume is aimed at scholars of medieval, social, and intellectual history, archaeology and cultural studies, and historians of Christianity, Judaism, Islam, and Scandinavia. 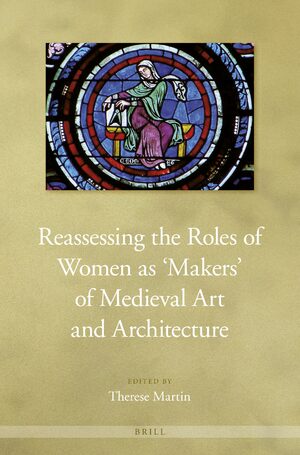 Push Me, Pull You 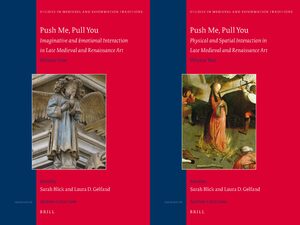 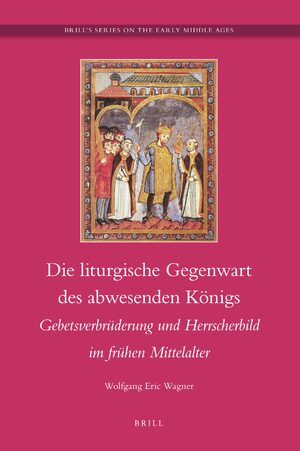