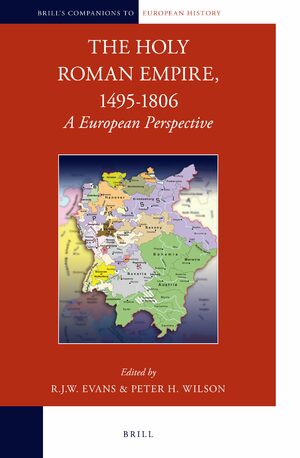 Volume Editors: Robert Evans and Peter Wilson
In the early modern period the Holy Roman Empire, or Reich, was one of the oldest and largest European states. Its importance was magnified by its location at the heart of the continent, by the extensive international connections of its leading families, and by the involvement of foreign rulers in its governance. This book breaks new ground in its collective exploration of aspects of cross-border and transnational interaction, and of political and diplomatic, social and cultural relations. There are essays on important turning-points, especially 1648 and 1806; on the patterns of rulership of the emperors themselves; on areas which lay on the margin of the Reich; on neighbouring countries which interacted with the Empire; and on visual and material culture.
Contributors are Wolfgang Burgdorf, Olivier Chaline, Heinz Duchhardt, Jeroen Duindam, Robert Evans, Sven Externbrink, Robert Frost, Lothar Höbelt, Thomas DaCosta Kaufmann, Petr Mat'a, Nicolette Mout, Thomas Munck, Géza Pálffy, Jaroslav Pánek, Adam Perłakowski, Friedrich Polleroß, Blythe Alice Raviola. Peter Schröder, Kim Siebenhüner, Peter H. Wilson and Thomas Winkelbauer.
E-Book (PDF)

€168.00$210.00
​
Add to Cart
R.J.W. Evans, Ph.D. (1969) in History, University of Cambridge, is Regius Professor of History Emeritus at the University of Oxford. He has written extensively on the (early) modern history of central Europe, e.g. The Making of the Habsburg Monarchy (2nd edn 1991).
Peter H. Wilson, Ph.D. (1990) in History, University of Cambridge, is GF Grant Professor of History at the University of Hull. He has published extensively on the history of the Holy Roman Empire, including The Thirty Years War (Harvard, 2009).
"...but the second volume, which shines light into hitherto dark corners, is equally to be welcomed...
Tom Scott (University of St. Andrews), Germany History, Vol. 31 2013 (doi:10.1093/gerhis/ght026)
List of Illustrations and Maps ... ix
List of Contributors ... xi
Introduction ... 1
Peter H. Wilson and R.J.W. Evans

Section Two: Habsburg Governance
Inside the Empire and for the House of Austria: The Buquoy Family from the Spanish Low Countries to Bohemia ... 79
Olivier Chaline
The Habsburg Court in Vienna: Kaiserhof or Reichshof ? ... 91
Jeroen Duindam
Bohemia and the Empire: Acceptance and Rejection ... 121
Jaroslav Panek
Bohemia, Silesia and the Empire: Negotiating Princely Dignity on the Eastern Periphery ... 143
Petr Matˇa
Separation and Symbiosis: The Habsburg Monarchy and the Empire in the Seventeenth Century ... 167
Thomas Winkelbauer

Section Three: Cores and Peripheries
State-Building within the Empire: The Cases of Brandenburg-Prussia and Savoy-Sardinia ... 187
Sven Externbrink
Core and Periphery: The Netherlands and the Empire from the Late Fifteenth to the Early Seventeenth Century ... 203
Nicolette Mout
The Imperial System in Early Modern Northern Italy: A Web of Dukedoms, Fiefs and Enclaves along the Po ... 217
Blythe Raviola

Section Four: Neighbours
The Impact of War: The Holy Roman Empire and Poland-Lithuania, c. 1600–1806 ... 239
Robert Frost
An ‘Old Empire’ on the Periphery of the Old Empire: The Kingdom of Hungary and the Holy Roman Empire in the Sixteenth and Seventeenth Centuries ... 259
Geza Palffy
The Polish-Lithuanian Commonwealth and Electoral Saxony in the Early Eighteenth Century: Crisis and Cooperation ... 281
Adam Perłakowski
The Northern Periphery: German Cultural Influences on the Danish-Norwegian Kingdom during the Enlightenment ... 293
Thomas Munck

Section Five: Imperial Culture and Identity
Centres or Periphery? Art and Architecture in the Empire ... 315
Thomas DaCosta Kaufmann
Where Did the Jewels of the German Imperial Princes Come From? Aspects of Material Cultural in the Empire ... 333
Kim Siebenhüner
Portraiture at the Imperial Court in the First Half of the 17th Century ... 349
Friedrich Polleross
Epilogue International System and Imperial System in the ‘Short’ Eighteenth Century: Two Worlds? ... 367
Heinz Duchhardt

Academic libraries, specialists, students, educated laypeople with interest in the history of (early) modern Europe, esp the German-speaking lands and their neighbours