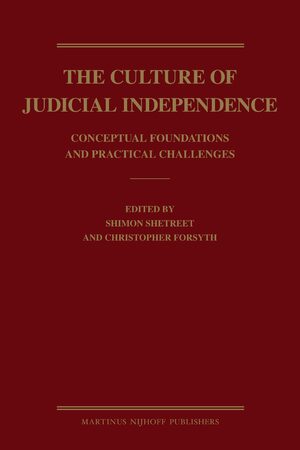 The Culture of Judicial Independence

Editors: Shimon Shetreet and Christopher Forsyth
The creation of a culture of Judicial Independence is of a central significance both in national domestic legal systems, as well as for the international courts and tribunals. The main aim of this volume is to analyze the development of a culture of Judicial Independence in comparative perspectives, to offer an examination of the conceptual foundations of the principle of judicial independence and to discuss in detail the practical challenges facing judiciaries in different jurisdictions. The proposed volume is based on the papers presented at the five conferences held in the framework of The International Project on Judicial independence. The editors of this volume and the contributors to it are leading scholars and distinguished experts on judicial independence and judiciaries.
E-Book (PDF)

€184.00$228.00
​
Add to Cart
Shimon Shetreet is Professor of Law at the Hebrew University of Jerusalem, Israel. He holds the Greenblatt chair of public and international law and is past chairman of the Sacher Institute of Legislative Research and Comparative Law. Professor Shimon Shetreet was a Member of the Chief Justice Landau Commission on the Israeli Court System, 1980, and a Judge on the Standard Contract Court (1981-88). Professor Shetreet is author and editor of a number of books, including Judges on Trial (1976), Judicial Independence: The Contemporary Debate (1985), The Role of Courts in Society (1988) , National Security and Free Speech (1991), Pioneers in Tears: Anthology on North African Jewry (1991), Justice in Israel (1994), Women in Law (1998), The Good Land between Power and Religion (1998), Law and Social Pluralism (2002) and On Adjudication (2004 ). He is the author of numerous publications in legal journals in Israeli and overseas law reviews. Professor Shetreet’s book Judges on Trial: A Study of the Appointment and the Accountability of the English Judiciary(1976) was relied upon by the House of Lords in the Pinochet Case in January 1999 and this and other works have also been relied upon as well in numerous highest court cases in other countries – Canada, Australia, New Zealand and India. He served as General Coordinator, International Bar association Project for Minimum Standards of Judicial Independence 1980-1982, Speaker, General Rapporteur and Chairman in numerous legal international conferences of leading academic and professional organizations, including, International Bar Association, First World Conference on the Independence of Justice, Congress of Comparative Law and International Association on Procedural Law. In recent years Professor Shetreet together with Professor Forsyth was the head of the international project on judicial independence which held five international conferences. Professor Shetreet has held high public offices. Between 1988 and 1996 he served as Member of the Knesset the Israeli Parliament. His past government positions include a cabinet Minister in the Rabin Government where he served as Minister of Economy and Planning, Minister of Science and Technology, Minister in charge of the Second Television and Radio Authority and Minister of Religious Affairs. In addition to his distinguished academic career and his public offices he also held high business positions including member of the board of Bank Leumi and Chairman of the Board of Mishaan.

Christopher Forsyth is Professor of Public Law and Private International Law in the University of Cambridge. He is the author of many books and articles in scholarly journals on Public Law and Private International Law but of particular importance for present purposes are his books, In Danger for their Talents: A study of the Appellate Division of the Supreme Court of South Africa from 1950 (Juta & Co,1985) and Administrative Law (10th ed, OUP, 2009) with the late Sir William Wade QC (This is the standard textbook on Administrative Law in England and other common law jurisdictions. It is widely read by students, and regularly relied upon by practitioners and judges throughout the Commonwealth). He is also a barrister (of the Inner Temple (elected Bencher elected 2003)) with Chambers in London. He sits as a Recorder (part-time judge) on the South Eastern Circuit. He is also Director of the Centre for Public Law in the University of Cambridge. He has worked with several governments advising on constitutional and administrative law questions of the highest moment.
"Shetreet and Forsyth’s collection makes a significant contribution to the comparative literature on judicial independence and is a worthy successor to the 1985 book.
(...) Shetreet and Forsyth’s book is a tremendous resource for a wide audience of lawyers and scholars (...)."
Lorne Neudorf, The Modern Law Review 2013, 76(1), 178–190.
The volume on the Culture of Judicial Independence is an essential purchase for any serious law library in the world, including lawyers, academic institutions, judges, policy makers and political scientists.