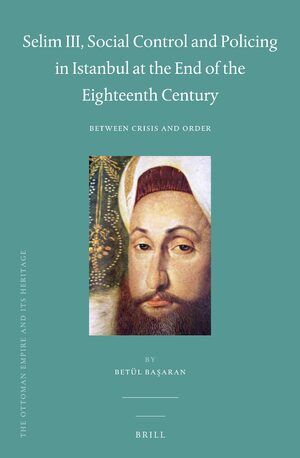 Selim III, Social Control and Policing in Istanbul at the End of the Eighteenth Century

Between Crisis and Order

Author: Betül Başaran
In Selim III, Social Order and Policing in Istanbul at the End of the Eighteenth Century Betül Başaran examines Sultan Selim III’s social control and surveillance measures. Drawing mainly from a set of inspection registers and censuses from the 1790s, as well as court records she paints a colorful picture of the city’s residents and artisans. She argues that the period constitutes the beginnings of large-scale population control and crisis management and urges us to think about the Ottoman Empire as a polity that was increasingly becoming a “statistical” state, along with its contemporaries in Europe, and to go beyond mechanistic models of borrowing that focus primarily on military reform and European influence in our discussions of Ottoman reform and “modernity”.
E-Book

€124.00$152.00
​
Add to Cart
Betül Başaran, Ph.D. (2006), University of Chicago, is Associate Professor at St. Mary's College of Maryland. She has published articles on Istanbul's population and artisans during the late eighteenth and early nineteenth centuries.
'Başaran’s is an important contribution to studies focusing on the later part of the eighteenth century, especially in terms of putting into perspective the social reforms of a ruler that is much more documented for his military reforms'.

Chapter 3: Wartime Crisis and the New Order: The Policing of Istanbul, 1789–92

Chapter 5: “We Have No Security”: Public Order in the Neighborhood

Middle/Near Eastern studies centers and academic libraries, history undergraduate and graduate programs with a focus on the Ottoman Empire, all interested in urban studies and modernization, development of modern policing and population control.