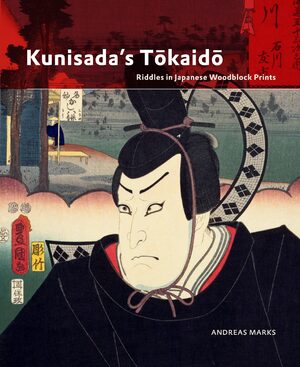 Author: Andreas Marks
The Tōkaidō highway, connecting Edo with Kyoto, was the most vital thoroughfare in Japan. Its cultural presence in pre- to early modern Japanese society led to the publication of woodblock print series, such as the widely known landscape prints by Hiroshige, that took this famous road as their theme.
The prints of Utagawa Kunisada, the most sought-after woodblock print designer of his day, represent a different treatment of the Tōkaidō, in which popular kabuki actors in specific roles are paired with Tōkaidō post stations. This study discusses the phenomenon of serialization in Japanese prints outlining its marketing mechanisms and concepts. It then proceeds to unravel Kunisada’s pairings of post-stations and kabuki roles,
which served as puzzles for his audience to decipher. Finally, this study analyses Kunisada’s methods when he invented and developed these patterns.
Kunisada’s Tōkaidō is a valuable visual source for the print collector, illustrating over 700 prints and it has been selected for an Honorable Mention at the 2014 IFPDA (International Fine Print Dealers Association) Book Award.
Hardback

€99.00$129.00
Hardback
Add to Cart
Andreas Marks is Head of the Japanese and Korean Art Department at the Minneapolis Institute of Arts. He received his Ph.D. in Japanese art history from Leiden University, The Netherlands, and a M.A. in East Asian art history and Chinese studies from Bonn University, Germany. He is the author of Japanese Woodblock Prints: Artists, Publishers and Masterworks (2010), Publishers of Japanese Prints: A Compendium (Hotei, 2011), Genji's World in Japanese Woodblock Prints (Hotei, 2012) and other books.
Scholars, curators, art dealers, and collectors of Japanese art, in particular Japanese prints. This study is also of interest to scholars of Japanese history (Tokaido) and scholars of publishing history in Japan.