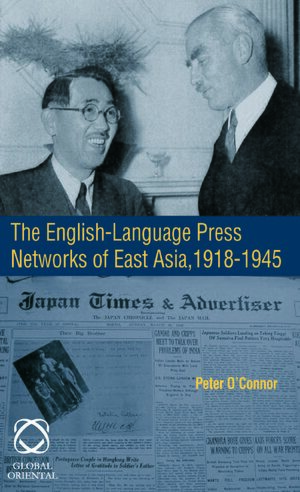 Author: Peter O'Connor
This study is the first to assess the combined significance of the English-language newspapers of China, Japan and Korea in the period 1918-45. It not only frames the English-language press networks in the international media history of East Asia but also relates them to media developments in the ‘British world’ linking Fleet Street to the Empire and Dominions, and to the rise of the United States as a broker of international opinion on and in the Asia-Pacific. The English-language newspapers occupied a narrow but significant segment of the public sphere in East Asia in the inter-war years.As forums of opinion on Japanese, Chinese and Western interests in East Asia, they also served as vehicles of propaganda, particularly during the crisis-ridden 1930s and the Pacific War. With this examination of the media affiliations, editorial line, and access to official bodies in East Asia and theWest of most of the English-language newspapers published in East Asia in the period under review, the author demonstrates that these publications formed distinct networks in terms of the editorial positions they took vis-a-vis the key issues of the day, especially Japan’s imperial project in East Asia.
E-Book (PDF)

€94.00$116.00
​
Add to Cart
"... O'Connor captures the superheated atmosphere of the times in this immensely detailed work, one that is likely to become the definitive study of the period's press networks. Like other standard works (one thinks of Peter Ackroyd's magisterial, "London: The Biography"), it sets the bar very high for those who follow."
Stephen Mansfield, The Japan Times ONLINE, (20 March, 2011)

"... Anyone eager to learn about the prewar history of the foreign press in Japan could not ask for a better, sharper guide. The English-Language Press Networks of East Asia, is a highly detailed, valuable analysis that won’t have to be done again. O’Connor is your man."
Roger Buckley, Number 1 Shimbun, (February 2011)

"... Professor O’Connor has delivered the theoretical and detailed goods on what today is trendily known as the global information highway. Journos and historians of east Asia should order their copies pronto. Satisfaction guaranteed."
Henry Hilton, Japan Today, (2011)

"... In conclusion this is a useful and most welcome study that shines a great deal of light into this previously murky aspect of Western relations with Japan... the appearance of O'Connor's book means we are getting a much greater understanding of the role of the media in the crucial deades leading up to the Pacific War and that is a development that is of great value for all historians of those turbulent years."
Antony Best, Japan Forum, 23:2, (August 2011)

"... 'This book,' the author starts boldly, 'argues that the English-language press of East Asia played a significant role in the shaping of international perceptions of Japan and East Asia (page 1).' Professor O’Connor justifies this claim with a wealth of detail gleaned from years of research in the field and from countless publications on the subject of Japanese government propaganda..."
Ian Nish, The Japan Society Review, (August 2011)

"... Richly illustrated with mugshots of the media movers and shakers at the heart of the enterprise - many of them British, with a substantial Anglo-Irish contingent - this erudite study is packed with seedy drama, media endgames and the surly but determined adventures of Japan's 'publicity warriors' during the Pacific War..."
Andrew Barrow, The Oldie, (March 2012)

"...O’Connor is to be commended for the patience with which he sifted through a vast amount of English and Japanese-language sources to identify the many individual actors of this story and the interconnecte interests which bound them into various networks. This task was particularly difficult since the lines of action of these actors were not always consistent, a fact which had the potential to undermine the overall cohesiveness of the press network as an 'informal accumulation[s] of commonalities of editorial line, worldview and commercial interest' (p. 66)..."
Rezensiert von Amelia Bonea, Comparativ 22 (2012/3)
Acknowledgements; Notes on Conventions; Foreword; List of Figures; List of Plates; Introduction; 1: The background, 1822-1918; 2: The Foreign Ministry network, 1904-1937; 3: Britain in East Asia and the Japan Chronicle network, 1891-1936; 4: The United States in East Asia and the Japan Advertiser network, 1911-1936; 5: Reporting Japan, 1918-1930; 6: Reporting Japan in China, 1927-1937; 7: Endgame, 1936-1941; 8: Publicity warriors: the Japan network, 1941-1945; 9: Conclusions; Bibliography; Appendix 1: The Missouri Mafia; Appendix 2: Unpublished and lost Yenching University Master’s Theses; Appendix 3: The Youngs of Kobe; Appendix 4: Foreign correspondents in Chungking, 1942; Appendix 5: Exchange rates; Appendix 6: Japan correspondents of The Times, London, 1868-2009; Appendix 7: The English-language press of Japan, 1861-1956; Appendix 8: The English-language press of China: a selective chronology, 1845-1949; Appendix 9: The English-language press of Korea, c.1890-1937; Index
Professional and scholarly