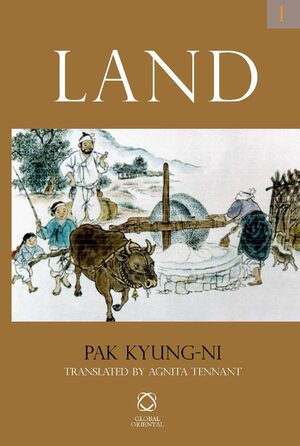 Author: Kyung-ni Pak
Translator: Agnita Tennant
Global Oriental is pleased to announce publication of the English translation of Part I (in three volumes) of Pak Kyung-ni’s Land (T’oji). Originally published in five parts, the work is widely regarded as a masterpiece of Korean literature and has achieved unprecedented popularity in Korea. The epic follows the fortunes and misfortunes of several generations of villagers of a traditional farming community, and at the same time chronicles Korea’s tumultuous history from 1897 to 1945. Part I, which is a self-contained story and considered the most powerful example of her writing, deals with the first ten years of the Ch’oe farming household and opens with the village celebration of the Harvest Moon Festival.
E-Book (PDF)

"This article explores some of the issues that prevent the existence of a more diverse canon in the field of world literature. It discusses extra-literary issues that have been effectively displaced onto the question of literary quality and outlines some of the concrete hurdles that face minority literatures, with reference to the literature of modern East Asia (China, Korea and Japan). The final section examines Pak Kyongni’s Land (1969–1994), a novel virtually unknown outside of Korea but revered there as the national epic. The discussion of a work that is regarded as ‘the
best that has been thought and said in the world’ by one nation yet remains practically unknown to the world will bring to the fore issues of ranking and status produced by the ‘worldification’ of literatures. In the process, it will consider some of the dynamics between nationality and universality, the relations between literature and nation, and what it means for literatures to be in dialogue when literatures and literary histories have been defined along national lines...."
'An Unknown Masterpiece: On Pak Kyongni's Land and World Literature', by Dr Sowon S Park in European Review, Vol. 23, No. 3, 426-438 © 2015 Academia Europæa

"Pak Kyung-ni’s novel, Land, opens colourfully in 1897 at the traditional feast of the harvest moon, still one of the most important dates in the Korean calendar, where we are introduced to some of the hundreds of characters who people the vast canvas of this five-part national epic... This is a work of immense ambition, covering nearly fifty years of history, and closing with the Japanese surrender in 1945. It appeared in serial instalments between 1969 and 1993, and the total text consists of more than 7,000 pages..."
Margaret Drabble The Times Literary Supplement, (22 June, 2011)
Click here to see the full review - http://entertainment.timesonline.co.uk/tol/arts_and_entertainment/the_tls/article7176556.ece
General/trade