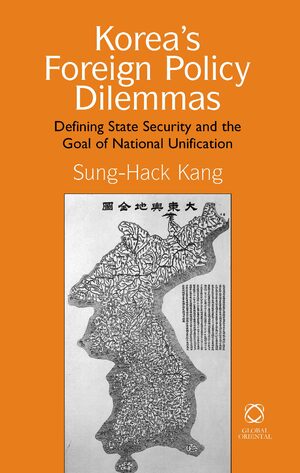 Defining State Security and the Goal of National Unification

Author: Sung-Hack Kang
Koreans historically consider their country as a victim of foreign powers – sometimes seeing themselves as a shrimp among whales. In fact, Korea's national status has to a great extent been determined by the historical rivalries between the great powers. This collection of essays, produced over time by one of Korea's leading political scientists, probes many of the fundamental post-Korean-War issues South Korea has wrestled with in the context of its foreign policy positions, not least the question of how it actually defines its foreign policy, its relationship with the United States, and the ever-present security issues. Other essays examine the role of the US on the Korean peninsula after the end of the Cold War; what policy directions South Korea should take towards North Korea; what is North Korea's security policy; and what are the conditions for reunification. This thought-provoking volume provides a valuable overarching framework towards a more informed understanding of how South Korea's relationship with the outside world has evolved in the twentieth century and the manner in which it is likely to do business in the twenty-first.
E-Book (PDF)

€112.00$137.00
​
Add to Cart
Sung-Hack Kang is Professor of International Relations at Korea University (since 1981). He was the first best book award winner from the Korean Association of International Studies in 1995. Professor Kang is author of many books in Korean, including 'Chameleon and Sisyphus: Changing the International Order and Korean Security', 'The Trans-Siberian Trains and Samurai: the Diplomacy and Military Strategy of the Russo-Japanese War', and 'The Mortal God and the Peace Tower of Babel: The Principles of International Politics and the Quest for Global Constitutional Order for Peace'.

"... Whether or not one accepts the basic conservatism that prevails in so much of South Korean political science, these essays are worth reading for an understanding of why that strand is so strong. Perhaps now that he has ventured into a full-scale work in English, Professor Kang might be persuaded to produce a longer and more cohesive work. It would certainly be read with interest."
J.E. Hoare, Asian Affairs, vol. XLIII, no. I, March 2012
Foreward; Preface; Acknowledgments; 1 The Korean Style of Foreign Policy: International Bandwagoning for Survival?; 2 Korean Nation’s Historical Lessons: Platonic Korea, Machiavellian Japan, and America’s Asian Policy in the Imperial Age; 3 Korea-Russia Relations in the Historical Perspective; 4 America’s Foreign Policy toward East Asia: From God father to an Outsider?; 5 South Korea’s Security Policy: Historical Review and Appraisal; 6 Shifting Historical Meaning of American Troops in South Korea and Its Implications upon the Korean peninsula; 7 Crisis Management under Armistice Structure on the Korean peninsula during the Cold War; 8 The Steps to Confidence-Building for Disarmament between North and South Korea; 9 Changing Strategic Milieu for East Asia and the Long Road to Korean Unification; 10 The “Sunshine Policy” and South Korean Security: Is North Korea an Aesopian Traveler’s Overcoat or King Solomon’s Shield?; 11 North Korean Security Policy and Military Strategy: Strategic Metamorphosis from Sisyphus to Chameleon?; 12 North Korea’s Kim Jong Il Regime after September 11: Like an Island of Autocracy in the Sea of Democracy?; 13 The South Korea-the US Alliance Has Come to a Fork and Whither Way for South Koreans: “Midlife Crisis” or “Twilight Divorce”?; 14 The Special Relationship between South Korea and the United Nations: Metamorphosis from a Beneficiary into a Benefactor and Vice Versa; 15 New Geopolitical Configuration of Power in the Asia-Pacific World for the Twenty-First Century: Will It Resemble Time’s Cycle or Time’s Arrow toward a Regional Brave New World?; 16 Epilogue; Timeline; Bibliography; Index
Professional and scholarly