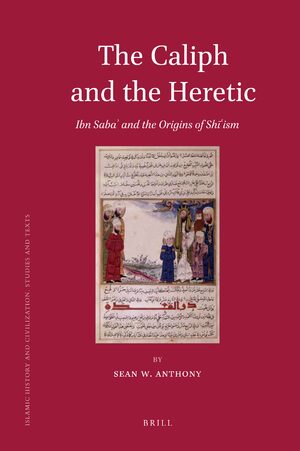 The Caliph and the Heretic

Series:  Islamic History and Civilization, Volume: 91
Author: Sean Anthony
This book is an examination of the traditions and legends concerning early Islam’s first and most infamous heretic, the Yemenite Jew known as ʿAbd Allāh ibn Sabaʾ. Tracing the evolution and transformation of the many stories and narratives about Ibn Sabaʾ as adapted by Sunnī and Shīʿī scholars alike, this work attempts for the first time to give a comprehensive account of the formation of the image of Ibn Sabaʾ as the quintessential heretic of Islam’s early years. It also offers a new interpretation of the historical importance and beliefs of Ibn Sabaʾ and those early Shīʿa reviled as his followers, the Sabaʾīya. The end result is a revolutionary, new portrait of Shīʿite origins and early Islamic sectarianism.
E-Book (PDF)

€152.00$189.00
​
Add to Cart
Sean W. Anthony, Ph.D. (2009) in Near Eastern Languages and Civilizations, is Assistant Professor of History at University of Oregon.
"Anthony’s enthusiasm is evident on every page. This book is an important study on Ibn Saba’ and the Sabaʾ iyya, filling a gap that exists, despite the numerous studies that touch upon the topic, as none has been devoted entirely to them. The discovery of new sources, incorporated in the book, elucidate the portrayals of Ibn Saba’ and the Sabaʾiyya, and its flexible approach and methodology make this book an important contribution to the field."
Yasmin Amin in Al-Masāq, 29:1, 91-93, January 31, 2017.

"... an exhaustive work carried out according to an accurate critical methodology."
Rosanna Budelli in Islamochristiana 38 (2012).

"... a welcome addition to the corpus of scholarship on the emergence of sectarian divisions in early Islam."
Steven C. Judd in Ilahiyat Studies 4.1 (2013).

“In his study on Ibn Sabaʾ, Sean Anthony succeeds in navigating the intricate maze of early historical akhbār and heresiographical accounts, highlighting the complexity of the source material on the origins of Shīʿism… The Caliph and the Heretic is an invaluable resource for scholars of early Shīʿism and early Islamic history and historiography.” Samer Traboulsi in Al-Abhath 60-61 (2012-2013), p. 191.

List of Table
Acknowledgments
Abbreviations
Introduction
Chapter One. Ibn Sabaʾ and the Sayfian Corpus
Chapter Two. Sayf ibn ʿUmar and the Sabaʾīya (I): The Caliphate of ʿUthmān ibn ʿAffān
Chapter Three. Sayf ibn ʿUmar and the Sabaʾīya (II): ʿAlī ibn Abī Ṭālib the Battle of the Camel
Excursus: The Sayfian Corpus in the Riwāya of Naṣr ibn Muzāḥim
Chapter Four. Ibn Sabaʾ and the Heresiographers
Chapter Five. The Execution of Ibn Sabaʾ
Chapter Six. The Parousia of ʿAlī ibn Abī Ṭālib
Excursus 1: ʿAlī in the Clouds
Excursus 2: The Letter of ʿAlī Given to ʿAbd Allāh ibn Wahb al-Hamdānī
Chapter Seven. The Sabaʾīya of the Umayyad Period
Conclusion
Bibliography
Index
All those interested in religious history, the history of Islamic Late Antiquity, the history of Shi'ism, and the history of Islamic sectarianism.