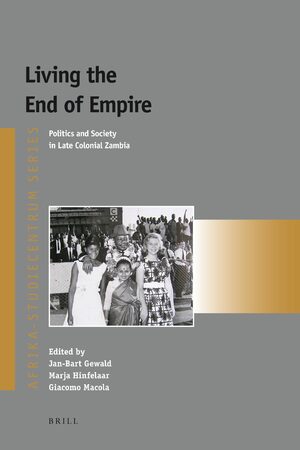 Living the End of Empire

Editors: Jan-Bart Gewald, Marja Hinfelaar and Giacomo Macola
Building on the foundational work of the Rhodes-Livingstone Institute, the essays contained in Living the End of Empire offer a nuanced and complex picture of the late-colonial period in Zambia. The present volume, based on untapped archival material and sources that have emerged in recent years, throws new light on some of the historical trajectories that the teleological gaze of nationalist scholars tended to ignore or belittle. By bringing to view the deep-rooted tensions underlying the Zambian nationalist movement, the painful dilemmas faced by chiefly and religious institutions, and the contradictory experiences of European and Asian minorities, Living the End of Empire draws inspiration from – and contributes to – a growing literature that is concerned with the study of social, political and cultural forces that did not readily fit into the then dominant narratives of united anti-colonial struggles.
E-Book (PDF)

€44.00$60.00
​
Add to Cart
Jan-Bart Gewald, Ph.D. (1996) in History, Leiden University, is a historian at the African Studies Centre in Leiden. He has published extensively on aspects of African history and is currently focusing on the relationship between people and technology in Africa.

Marja Hinfelaar, Ph.D. (2001) in History, Utrecht University, is an historian working at the National Archives of Zambia, where she coordinates digitisation projects. Her research interests include the historical relationship between church and state in Zambia.

Giacomo Macola, Ph.D. (2000) in History, School of Oriental and African Studies, University of London, is Lecturer in African History at the University of Kent at Canterbury and Researcher at Leiden University, The Netherlands. He is the author of a number of monographs and articles on Zambian history. He is currently working on 'A Social History of Firearms in Central Africa to the Early Twentieth Century'.
'This well-integrated collection honors senior Zambianist historian Andrew Roberts (who contributes an introductory overview) without trying to encompass his manifold interests. It attains greater coherence than a typical festschrift by focusing on the last years of colonialism, particularly the contentious Central African Federation era of c.1953-63. Solid individual chapters cover European setters; the Indian community; the political roles of the Catholic Church, traditional chiefs, and labor unions; and early US diplomatic contacts. Christopher Annear's essay on the Luapula River fishery notably advances the ongoing restudy of classic Rhodes-Livingstone Institute ethnographies. Perhaps most significant is coeditor Macola's revisionist view of pioneering nationalist leader Harry Nkumbula, crediting him with more astuteness and dedication than standard accounts. The editors dispute conventional views of an inevitable triumph by Kenneth Kaunda's United National Independence Party, which governed from 1964 to 1991. They emphasize clashing political visions among urban migrant elites in Lusaka, the Copperbelt and its northern hinterland, and Southern Province peasant producers represented by Nkumbula. This volume steers Zambian history in fruitful new directions and provides valuable components of any new consensus that may emerge.


'This edited volume seeks to portray the complexity of late colonial history in Zambia. It accomplishes this goal by shedding light on conflicts in the nationalist movement, chiefly and religious institutions and experiences of Western and Asian communities.....The narrative character makes this volume an enjoyable read'.


'The book makes a very effective contribution to the history of modern Zambia. It also makes for delightful reading, typical of those young
historians of this part of Africa who refer to themselves as Zambianists and who also include their teacher among their number.