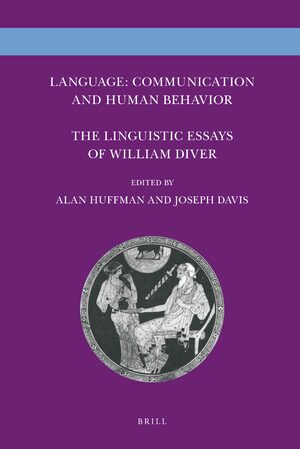 The Linguistic Essays of William Diver

Editors: Alan Huffman and Joseph Davis
William Diver of Columbia University (1921-1995) critiqued the very roots of traditional and contemporary linguistics and founded a school of thought that aims for radical aposteriorism in accounting for the distribution of linguistic forms in authentic text. Grammatical and phonological analyses of Homeric Greek, Classical Latin, and Modern English reveal language to be an instrument whose structure is shaped by its communicative function and by the peculiarly human characteristics of its users. Diver's foundational works, many never before published, appear here newly edited and annotated, with introductions by the editors. The volume presents for the first time to a wide audience the depth and originality of Diver's iconoclastic thought.
E-Book

Alan Huffman, Ph.D. (1985) in Linguistics, Columbia University, is Professor of Linguistics and English in The City University of New York. He is the author of The Categories of Grammar: French lui and le (John Benjamins, 1997), and many articles on Columbia School linguistics.

Joseph Davis, Ph.D. (1992) in Linguistics, Columbia University, is Associate Professor of Linguistics in the School of Education, The City College of New York. He was co-editor of Advances in Functional Linguistics: Columbia School Beyond its Origins (John Benjamins, 2006).
Introduction: The Enduring Legacy of William Diver
Alan Huffman

Part VI: RECAPITULATION: THE HISTORY OF LINGUISTICS
18. The History of Linguistics in the West: How the Study
of Language Went Wrong in the Western Tradition
William Diver

Subjects:
History of Linguistics & Philosophy of Language, Languages and Linguistics