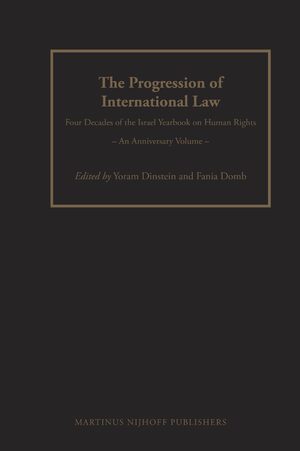 The Progression of International Law

Editors: Yoram Dinstein and Fania Domb
This volume was produced to celebrate the fortieth anniversary of the Israel Yearbook on Human Rights. Forty years have yielded an impressive forty annual volumes. When it was started in 1971, the Yearbook was the first of its kind anywhere in the world. It has always understood its mandate as transcending the narrow borders of the discipline of either national or international human rights. From the outset, international humanitarian law and
international criminal law were understood as coming within the proper framework of the Yearbook, as were on occasion articles on diverse freedoms that may seem out of bounds to a strict interpreter of the phrase “human rights”.

The present volume brings to the fore only one dimension of the Yearbook, namely essays. Twenty-five of them are collected here: twelve originally appeared in the first twenty issues of the Yearbook, and thirteen in the last twenty volumes, offering a fair cross-section of the literally hundreds of articles in the Yearbook over time, produced by authors from all over the world. Those chosen for inclusion in this Anniversary volume were felt to most impressively tap the rich lode of legal research; present insightful theses for intellectual discourse and argument; and enhance the readers’ knowledge and understanding.
E-Book (PDF)