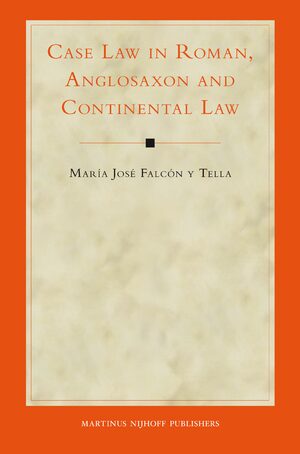 Author: María José Falcón y Tella
Case law is a widely studied field, posing a series of questions. The first issue relates to the nature of case law itself, as the term cannot be given a single meaning. There is no one definition of case law, but rather a plurality of meanings depending on the historical period and legal system in question.
After an analysis of Roman iurisprudentia and Anglo-Saxon case law, this work considers the Spanish legal system, as an example of a Continental jurisdiction, and distinguishes between the case laws of the Supreme and Constitutional Courts, the European courts, and the Superior Courts of Justice of the Autonomous Communities.
The book analyses these issues, among many others, in a clear and in-depth manner, from an historical and comparative approach of great interest and academic value.

€120.00$150.00
​
Add to Cart
María José Falcón y Tella is Professor of Philosophy of Law (1991) at the Complutense University of Madrid. She is the author of 23 books, many of them translated into different languages, such as Civil Disobedience (Martinus Nijhoff, 2004), Punishment and Culture (Martinus Nijhoff, 2006), Equity and Law (Martinus Nijhoff, 2008), and A Three-Dimensional Theory of Law (Martinus Nijhoff, 2010). She was awarded “The National Prize of Studies in Law” in 1987.
Excerpt of table of contents:
Preface;
Chapter 1 Introduction;
Chapter 2 Roman Iurisprudentia as Prudentia Iuris:
1. Introduction to Roman Law, Especially Classical Law;
2. Roman Iurisprudentia as Science of Law, as Distinct from its Modern Conception as Jurisprudenz in German and Jurisprudence in Anglosaxon Authors;
3. Priority of Iurisprudentia over Law in Roman Law;
4. Etymology of the Term Iurisprudentia as prudentia Applied to Law in a Practical Manner; Cognitive and Scientific Differences Regarding Scientia and Sapientia;
5. Decisive Creative Role in Roman Iurisprudentia – Neither via Legislator Nor Judge – of Two Bodies: Jurisconsults and Praetor;
6. Origin of Roman Iurisprudentia in the College of Pontiffs, as a “Secret” Concept, and Subsequent Conversion into “Lay” and “Public” Jurisprudence;
7. Value of Iurisprudentia and Ius Publicae Respondendi: Original Scope and Reduction by Augustus;
8. Grandeur of Roman Iurisprudentia, Owing to Casuistics, Inductiveness and Intuitiveness; Value of Science of Law Today as a Theoretical-Doctrinal Concept ;
9. Value of Iurisprudentia in Roman Law: The Source of Law?;
10. Why Iurisprudentia and not Iuriscientia?;
11. Roman Prudentia;
Chapter 3 The Anglosaxon Precedent:
1. The Anglosaxon System of Sources;
2. Distinction between “Jurisprudence” – Science of Law – and “Case Law” – a Judicial Phenomenon;
3. Differences between Common Law and Continental Legal Systems;
4. Main Differences between Anglosaxon Precedent and Continental Case Law;
5. Current Harmonisation of Statute Law and Case Law Systems;
Chapter 4 Continental Case Law:
1. Concept and Main Requirements of Case Law in the Spanish Legal System;
2. The Functions of Case Law;
3. Is Case Law, Especially that of the Supreme Court, a Source of Law in the Spanish Legal System?;
4. Changes in Case Law, Especially by the Supreme Court;
5. Main Rules on the Sources of Law and Case Law in the Spanish Legal System;
6. Case Law in Other Continental Legal Systems;
Bibliography; Index.

All those –students and academics- interested in general theory of law, civil and constitutional law, and case law, from an historical and comparative approach, regarding especially Roman, Anglo-Saxon and Spanish legal systems.