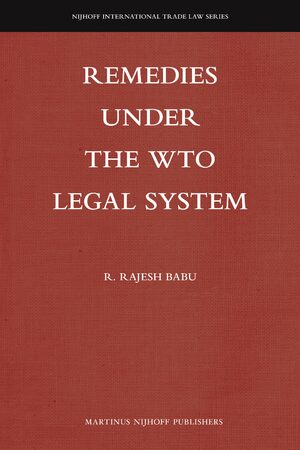 Remedies under the WTO Legal System

Author: R. Rajesh Babu
The World Trade Organization (WTO) dispute settlement system, has succeeded, since its establishment in 1995, in generating a perception that the DSU offers one of the most advanced multilateral adjudicatory systems that exist today, principally because of the large volume of cases it has attracted and settled. Despite a high record of satisfactory settlements of disputes and tall claims in appreciation, there is an equal amount of scepticism, particularly about the nature and content of remedies for violations of WTO rights and obligations. This book presents a critical review on the problems stemming from the nature and scope of the WTO remedies and its enforcement. The study highlights in a comparative perspective the lacunas and inadequacies in the current system, and in the process, accentuates the detrimental nature of the WTO remedies on the interest of the developing and least developing countries.
E-Book (PDF)

€198.00$247.00
​
Add to Cart
R. Rajesh Babu, Ph.D. (2009) in International Law, Jawaharlal Nehru University, is Assistant Professor in the Public Policy and Management Group at the Indian Institute of Management, Calcutta. He has published several articles on the topic of international and WTO law.
Forward
Acknowledgement
Table of Contents
List of Abbreviations

IV: REMEDIES UNDER THE WTO LAW
1. Introduction
2. Relationship between the WTO Law and the International Law
3. Nature of WTO Obligations: Bilateral or collective?
4. Access to the WTO Dispute Settlement: Legal standing
5. Material Aspects of Remedies under the WTO Dispute Settlement System
6. Implementation of Adverse DSB Rulings: The Procedural Aspect of Remedies
7. Compensation: Remedy for Non-Compliance
8. Remedies for Non-violation and Situation Claims
9. Preliminary Conclusions

The book would interest scholars and students of public international law, WTO law, as well as inter-regime conflicts, dispute settlement and countermeasures.