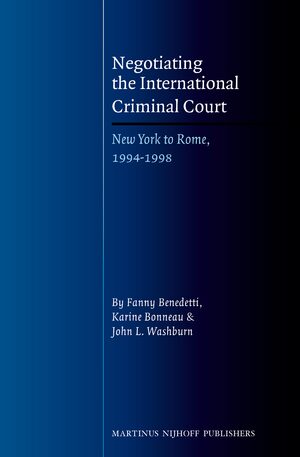 Authors: Fanny Benedetti, Karine Bonneau, and John Washburn
This is the story and analysis of the unforeseen and astonishing success of negotiations by many countries to create a permanent international court to try atrocities. In 1998, 120 countries astounded observers worldwide and themselves by adopting the Rome Statute for an International Criminal Court. From this event began important and unprecedented changes in international relations and law.
This book is for those who want to know and understand the reasons and the story behind these historic negotiations or for those who may wonder how apparently conventional United Nations negotiations became so unusual and successful. This book is both for those who seek detailed legislative history, scholars or practitioners in international law and relations and those simply curious about how the Court came about.

€152.00$188.00
​
Add to Cart
Fanny Benedetti is a human rights lawyer and gender expert working as an independent consultant with NGOs, IGOs and government, based in Paris, France. She participated in the ICC treaty negotiations on behalf of the NGO Coalition for an International Criminal Court in 1997 and 1998.

Karine Bonneau PhD, is a human rights lawyer and victims' rights expert, Director of the International Justice Desk of FIDH. She represented Redress, Amnesty International and the French Coalition for the ICC in the ICC negotiations from 1998 until 2000.

John Washburn convenes the American Nongovernmental Organizations Coalition for the International Criminal Court. He was an American diplomat and a United Nations official. He represented nongovernmental organizations in almost all of the negotiations for the Court’s Rome statute.