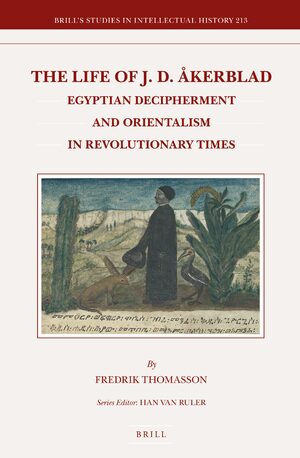 The Life of J.D. Åkerblad

Series:  Brill's Studies in Intellectual History, Volume: 213
Author: Fredrik Thomasson
Johan David Åkerblad (1763–1819) contributed to the decipherment of Egyptian hieroglyphs and Demotic and is known as a predecessor of Jean-François Champollion. This intellectual biography offers a new and less heroic interpretation of the first reading of the Egyptian scripts. Åkerblad, an exceptional linguist, was a diplomat and orientalist who spent several decades living in the Ottoman Empire, France and Italy. Of humble birth, he was a supporter of the French Revolution – something that stymied his career. His life cannot be understood in a purely Swedish national framework, and this study firmly situates him as an international scholar. The book discusses European expansion in the Eastern Mediterranean during the tumultuous decades around the year 1800, and traces Åkerblad’s momentous life in relation to the debates on ‘orientalism,’ the tradition of classical studies and the history of science.
E-Book (PDF)

$192.00
​
Add to Cart
Fredrik Thomasson, Ph.D. (2009) in History, European University Institute, Florence, is a Research Fellow at Uppsala University. He has recently published a number of articles on eighteenth century history, e.g. in the International Journal of Cultural Property, Lychnos and several anthologies.
‘’This is a sad but admirable work, well-written and well-researched. It is also extremely well-illustrated; the color plates of Åkerblad’s work in hieroglyphics are especially fine.’’
In: Reference & Research Book News, December 2013 p. 37.


Part I – The making of a diplomat and orientalist
1. Family and education
2. Constantinople – city of rumours
3. Diplomacy and intrigue
4. Travel in the East
5. War in Egypt
6. Mixing East and West
7. “The sabre in one hand and the Koran in the other”

Part IV – The Napoleonic wars and Restoration in Italy
17. Book thefts, inkblots and French expropriations
18. Antiquarian in Rome
19. Salons and belle amiche
20. Curses and cabals
21. Oriental Rome
22. Archaeology and art
23. French defeat
24. Digging with the Duchess of Devonshire
25. “Despised by Sweden and by every Swede”

Those interested in the decipherment of the hieroglyphs, the history of Egyptology and classical studies, as well as those following the debate on ‘orientalism’ and the history of oriental studies.