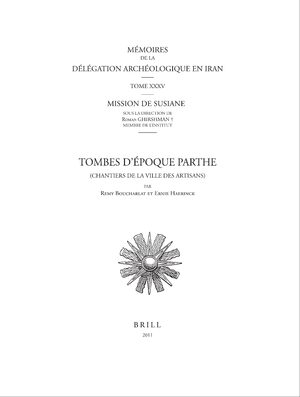 Authors: Remy Boucharlat and E. Haerinck
Among the hundred or so tombs of post-Alexander date excavated by Roman Ghirshman between 1947 and 1952 on the mound of the “Ville des Artisans” at Susa, six are remarkable for their construction and burial contents. Shortly before his death in 1979, Ghirshman, director of the French “Mission de Suse” from 1946 until 1968, had started to write up his final report. Based on his notes, the authors have engaged to publish these tombs, together with the original plans, drawings and photographs of the burial goods. The grave contents consisted mainly of pottery, but also included glass vessels, figurines, metal objects and other small finds. The study of the material from these large vaulted subterranean structures indicates that they were most likely intended as family tombs, thus remaining in use for several decades and should be dated in the first or second century AD. Similar tombs are known at other sites in the region of Susa, and even in Mesopotamia, e.g. at Seleucia on the Tigris. A synthesis of the evolution in tomb architecture and typology, as well as the burial practices, for the whole site of Susa between the Seleucid and early Sasanian periods (third century BC to third century AD), is also presented, based on the short reports and unpublished excavation notes of Ghirshman, in addition to unpublished reports by his predecessors at the site.
E-Book (PDF)

€120.00$150.00
​
Add to Cart
Remy Boucharlat is research director of CNRS in the Oriental and Mediterranean Studies division at the University of Lyon. He has published in the Journal of the Délégation Archéologique Française en Iran (DAFI) on excavations of the palace Achaemenid Chaour and studies on the post-Achaemenid palace of Darius. He also took part in excavations of Tureng Tepe in northern Iran and is co-author of volumes on the strong Sassanid and Islamic influences found there. As director of the French Research Institute in Iran, he lived in Tehran from 1994 to 1998, before launching a program of surface recognition on the site of Pasargadae in 1999, and subsequently around Persepolis in 2005. At the same time, he participated for several years (2001 to 2004) in the excavations of the Iron Age citadel Ulug Depe in Turkmenistan.

Ernie Haerinck, Ph.D. 1978 Ghent University, is Senior Professor in Near Eastern Archaeology at Ghent University. He has published more than 100 books and articles mainly on different aspects, periods, and excavations in Luristan (in western Iran), as well as southeast and northeast Arabia. He is the editor of the international journal Iranica Antiqua and is editorial board member of several other international series and journals. He is Fellow of the Royal Academy for Overseas Sciences of Belgium and Korrespondierenden Mitglied des Deutschen Archaölogischen Instituts. He has recently been working on a new project started in 2007 with yearly excavations at Mleiha in the Emirate of Sharjah and the United Arab Emirates.