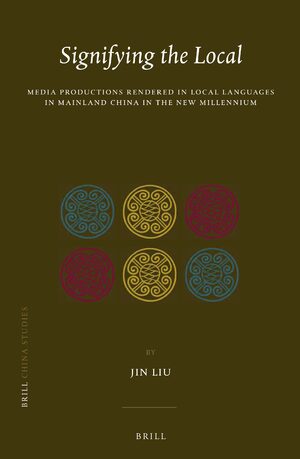 Author: Jin Liu
In Signifying the Local, Jin Liu examines contemporary cultural productions rendered in local languages and dialects ( fangyan) in the fields of television, cinema, music, and literature in Mainland China. This ground-breaking interdisciplinary research provides an account of the ways in which local-language media have become a platform for the articulation of multivocal, complex, and marginal identities in post-socialist China. Viewed from the uniquely revealing perspective of local languages, the mediascape of China is no longer reducible to a unified, homogeneous, and coherent national culture, and thus renders any monolithic account of the Chinese language, Chineseness, and China impossible.
E-Book

€145.00$174.00
​
Add to Cart
Jin Liu, Ph.D. (Cornell, 2008), is Assistant Professor of Chinese at Georgia Institute of Technology. She has published in journals including positions (forthcoming), Modern Chinese Literature and Culture, and Journal of Modern Literature in Chinese. She co-edited Chinese Under Globalization: Emerging Trends in Language Use in China (2012)
"Her topics include a historical review of the discourse of the local in 20th-century China, performativity in dubbing films in local languages, television news talk shows in local languages, popular music and local youth identity in the age of the Internet, multiplicity in mainstream studio films in local languages, and the unassimilated voice in recent fiction in local languages."
Reference & Research Book News, December 2013

"This wide-ranging exploration of the linguistic value found in localized Chinese media texts (including literary fiction) offers rich insights into the broader contexts of Chinese cultures... Liu’s extensively detailed book provides insights into the various modes of communication in China that challenge notions of Han-dominant, Putonghua-Mandarin-based entertainment. Through a variety of well-chosen examples across a range of mediums, Liu successfully informs us of a China far from the monoculture sold to us by Western media and (some) academics.... A mammoth undertaking."
The China Journal, No. 72 (July 2014), 170-172

"Liu’s monograph offers an impressive and extensive analysis of the place of dialects and local languages in modern China through analysis of a wide range of media and texts. It debunks the myth that mainstream media is monolithically Putonghua. Throughout the book, Liu links China-focused literary analysis and case studies to a variety of international contexts, making the work relevant to scholars working with similar themes outside of China. Overall, the monograph is comprehensively researched. ... The work must be praised for its scholarly attention to detail.
I highly recommend it for scholars and students with an interest in sociolinguistics, languages and media, social power and the use of language among different social and ethnic groups, and those interested in understanding the pluralistic reality of contemporary Chinese culture, a vision that contrasts with official PRC discourse and with what some China commentators would have us believe."
Lauren Gorfinkel, Macquarie University, MCLC Resource Center Publication, February 2017