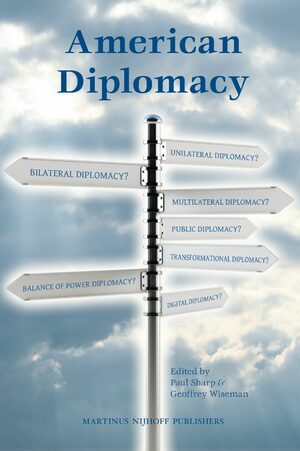 Editors: Paul Sharp and Geoffrey Wiseman
These essays examine questions arising from the Obama administration's efforts to revive American diplomacy and its response to the ways in which diplomacy itself is being transformed. The essays examine these questions from a variety of theoretical and practical perspectives provided by scholars and diplomats from around the world and within the United States.

A common focus of the collection is on how diplomacy's contribution to the effectiveness of foreign policy has been undervalued in the United States by governments, the foreign policy community, and academics. Together, the essays seek to raise awareness of American diplomacy conducted at all levels of government and society. They consider its future prospects in the context of America's economic difficulties and the anticipated further erosion of its international position. And they ask how American diplomacy may be strengthened in the interests of international peace and security, whether under a second term Obama administration or the leadership of a new president.

€57.00$71.00
​
Add to Cart
Paul Sharp is Professor of Political Science and International Relations at the University of Minnesota Duluth. He recently co-authored Futures for Diplomacy, a report for the Finnish Government undertaken by the Netherlands Institute of International Relations, Clingendael, and is co-editor for the journal, Hague Journal of Diplomacy.

Geoffrey Wiseman is Professor of the Practice of International Relations at the University of Southern California (USC). He is a former Australian diplomat, serving in three diplomatic postings (Stockholm, Hanoi, and Brussels) and as private secretary to the Foreign Minister, Gareth Evans. He also worked as principal officer in the Strategic Planning Unit of the Executive Office of the UN Secretary-General and as director of the USC Center on Public Diplomacy.

"This is one of those rare edited volumes which deserves to be read cover to cover." - Diplomacy & Statecraft, Richard Crockatt, University of East Anglia
Introduction
American Diplomacy
Paul Sharp and Geoffrey Wiseman