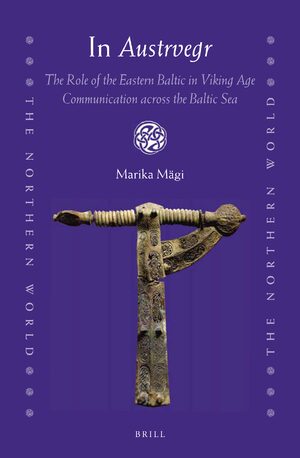 In Austrvegr: The Role of the Eastern Baltic in Viking Age Communication across the Baltic Sea

Author: Marika Mägi
Marika Mägi’s book considers the cultural, mercantile and political interaction of the Viking Age (9th-11th century), focusing on the eastern coasts of the Baltic Sea. The majority of research on Viking activity in the East has so far concentrated on the modern-day lands of Russia, while the archaeology and Viking Age history of today’s small nation states along the eastern coasts of the Baltic Sea is little known to a global audience.
This study looks at the area from a trans-regional perspective, combining archaeological evidence with written sources, and offering reflections on the many different factors of climate, topography, logistics, technology, politics and trade that shaped travel in this period. The work offers a nuanced vision of Eastern Viking expansion, in which the Eastern Baltic frequently acted as buffer zone between eastern and western powers.

Winner of the Early Slavic Studies Association 2018 Book Prize for most outstanding recent scholarly monograph on pre-modern Slavdom.
The work was described by the prize committee in the following terms: "The scope of this book is far broader than the title might suggest. It amounts to a substantial rethinking of the history of the eastern Baltic from the tenth to the thirteenth century, based on both archaelogical and written evidence. The author is by training an archaeologist, and she mounts a powerful criticism of historians who prioritise the written sources and then pick and choose from the archaeological evidence to suit their theories. This book foregrounds the archaeology, which is used to question and consider the written evidence. The author is also highly and rightly critical of the archaeological scholarship, for projecting back into the past the narrow concerns of the numerous nation states that now exist across the eastern and northern Baltic, or the Great Russian nationalist-materialist-imperialist interpretations of the Soviet period. The result is a detailed and fascinating account of the interactions of the worlds of Scandinavia and Rusʹ with the various peoples of the Baltic region, both Finno-Ugric and Baltic. The resulting picture of commercial, political, and cultural interaction across several cultures, and based on reading in a wide range of languages, is a tour-de-force."

€138.00$166.00
​
Add to Cart
Marika Mägi, Ph.D. (2002), Tartu University, is senior research fellow at the Centre for Medieval Studies at Tallinn University. She is an archaeologist and historian, and has published mainly on Viking Age and Middle Ages in Estonia and neighbouring areas.
Preface and Acknowledgements
List of Illustrations
List of Abbreviations

1 Viking Age Cultural Contacts across The Baltic Sea: Behind the Interpretations
1.1 The Evolutionary Development Model
1.2 Eastern Baltic Archaeology and the Concepts of Different Cultural Impacts
1.3 The Character of Communications across the Baltic Sea
1.4 Conclusions

4 The Historical Reality: Places, Place Names, and Ethnonyms in Written Sources
4.1 Estland(s) in the East
4.2 Pre-viking and Viking Age Eastern Baltic in Scandinavian Sources
4.3 What Was Rus’?
4.4 Languages and Personal Names
4.5 Conclusions

7 Between Consolidating States. The Eastern Baltic Areas in the 11th and 12th Centuries
7.1 Interaction with Scandinavian Kingdoms
7.2 Northern Eastern Baltic in the Final Centuries of Prehistory
7.3 The East Attacks
7.4 Landscapes around the Daugava Route
7.5 Southern Couronian Coast
7.6 Coins and Trade
7.7 Conclusions


All interested in the history and archaeology of the Vikings, especially of Eastern Vikings, and anyone concerned with the earlier history of the Baltic States and Finland.