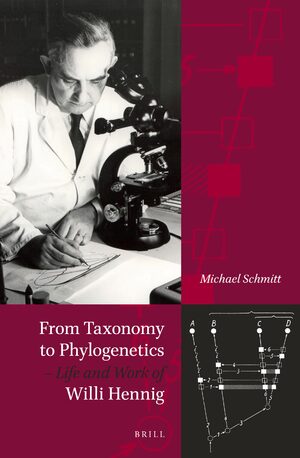 From Taxonomy to Phylogenetics – Life and Work of Willi Hennig

Author: Michael Schmitt
Biological Systematics has changed dramatically during the past 60 years from a handicraft or art to an accepted branch of science proper, due to the work of Willi Hennig, who was born in 1913. The scientific method of reconstructing phylogenetic relationships of organisms bases on Hennig's approach, the "Phylogenetic Systematics". The method is now so widely accepted and applied that it can firmly be regarded a paradigm, named 'cladistics'.
In contrast, the life and personality of its founder is remarkably little known in the scientific community. The present book offers a detailed biography of Willi Hennig, and traces the roots of his thinking from his schooldays until his death in 1976. Some outstanding academic teachers and friends of his are introduced, too.
The book offers an insight into the historical development of a 'scientific revolution', and highlights the life and the work of a 'cautious revolutioniser' in a Germany of dictatorship, war, and separation.

€110.00$142.00
​
Add to Cart
Prof. Dr. Michael Schmitt (Ph.D, Biology, 1982; Hab., Zoology, 1993) was curator at Zoologisches Forschungsmuseum Alexander Koenig, Bonn between 1992 and 2009. He was appointed professor in 2001. From 1997 to 2000 he was chairman of the section for Systematics of Deutsche Zoologische Gesellschaft (German zoological society) and member of the board of the International Society of Zoological Sciences from 2004 to 2008. Since 2009, he researches and teaches at the University of Greifswald. He’s considered the expert on the life of Willi Hennig and his legacy.
"[T]the present, elegant book, expertly compiled by M. Schmitt, still offers us newly revealed facts as well as a truly broad approach, which together make both interesting and elucidating reading. ... Particularly elucidating, in my view, is to learn about the careful way in which Hennig initially formulated and used his new ideas: by far not as rigid as has subsequently been suggested in places, and sufficiently conditional to leave room for other interpretations of the data at hand in interpreting from those the historical course of evolution."
- J. Carel von Vaupel Klein, in: Crustaceana 87(1) 1278-1279 (2014)

"...a fascinating read, because the material presented...is extraordinary. [... An] interesting insight into the state of Zoology in Western Germany during [the 1960s and '70s]. ... Schmitt combines his intimate historical knowledge of many of the key personalities in the field of Zoology with his vast zoological scholarship to throw a light on some especially heated controversies surrounding the introduction of Phylogenetic Systematics. ... [T]he book is a treasure for all interested in the life and work of Willi Hennig and the development of one of the most important ideas in biology in the second half of the 20th century: Phylogentics Systematics (= cladistics) and a must-read for aficionados of Phylogenetic Systematics [Hennig's book]."
- Thomas Stach, in: J. Zool. Syst. & Evol. Res., doi: 10.1111/jzs.12069

"For those people interested in the history of systematics, or the history of ideological thought more generally, this first scholarly treatise on Willi Hennig will be an essential and irreplaceable source of information."
- Susanne S. Renner, in: Syst. Biol. 63(3) 452-453 (2014)


“...a timely, attractive and detailed biograph of the man, with commentary on his researches and intellectual legacy … for those interested not only in Hennig, but in the functioning of German science in the mid-20th century.”
- Andrew V. Z. Brower, in: Cladistics (2013), DOI: 10.1111/cla.12057

"In most branches of science methodological approaches constantly change, but few changes are of a kind for which the term ‘revolution’ is appropriate. In systematic biology, however, the shift from classifying organisms according to some assessment of overall similarity to doing it according to inferred relative recency of common ancestry was exactly a change of that kind. Willi Hennig, the driving force behind this revolution, was an unassuming German insect systematist, and many biologists, to whom his name is familiar, will want to know more about his personality and the conditions under which his ideas developed during a particularly turbulent epoch in German history.
Michael Schmitt is singularly well qualified for writing this account, having a notable publication record on issues in biological history and being himself an active practicing systematic biologist. Moreover, he is at the same time sufficiently young to contemplate the treated events ‘in the clarity of hindsight’, and sufficiently old to have first-hand knowledge of the scene of German zoology in the 20th century and of many of Hennig’s contemporaries, who acted on that scene. As a commemoration of Hennig’s centenary in April 2013 the publication of this book is timely indeed."
- Niels P. Kristensen, emeritus professor of systematic entomology, University of Copenhagen

"Having read nearly every line Willi Hennig ever published, scanned scores of unpublished documents in private and public archives, and having befriended Hennig's family, Michael Schmitt - a professional entomologist himself - is in a unique position to sketch Hennig's life and work in an engaging, emphatic narrative."
Olivier Rieppel, The Field Museum, Chicago

"Who was Willi Hennig, the German Entomologist who changed the face of systematics forever? This is the first authoritative book on one the most influential biologists of the 20th century. The volume provides a wealth of hitherto unpublished information about the private life of Hennig his scientific career and the reception and impacts of his theory of phylogenetic systematics. Carefully investigated, splendidly written and beautifully illustrated this is truly a must-have book for every naturalist."
- Lars Krogmann.

Taxonomists, Phylogeneticists, Historians of Science, Entomologists, Zoologists, All interested in the history of a 'scientific revolution'