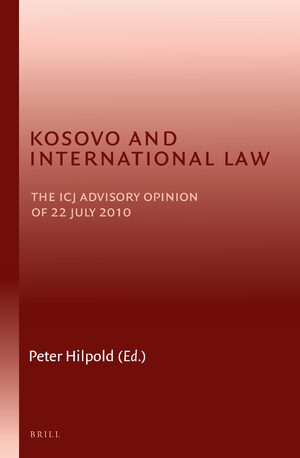 编者： Peter Hilpold
The ICJ Opinion on Kosovo was much awaited both in politics and in academic literature as it was expected to contain not only a decisive verdict on a long-lasting controversy on the Balkans but also a ground-breaking stock-taking on many pivotal questions of international law. The Opinion handed down by the ICJ on 22 July 2010 immediately gave rise to intense discussions that made broad reference to issues such as self-determination, secession, state sovereignty, state recognition and the constitutionalization of the international law order. Based on one of the first major international conferences on this subject, this book contains contributions by the international law experts who gathered at the University of Innsbruck (Austria) to discuss this subject.
电子书

From  € 144.00$ 177.00
​
加入购物车
Peter Hilpold, Professor for International Law, European Law and Public Comparative Law at the University of Innsbruck. He is the author of over 150 publications in the fields mentioned. He is a co-editor of the journal “Europa Ethnica” and in the board of several law journals.
Preface
Authors
List of abbreviations

1. The Kosovo Opinion of 22 July 2010: historical, political and legal pre-requisites, Peter Hilpold
2. Recognition of New States – The Case of Premature Recognition, Christian Tomuschat
3. Secession in International Law: Does the Kosovo Opinion require a re-assessment of this concept?, Peter Hilpold
4. Some Remarks on the Relationship between Secession and General International Law in the Light of the ICJ´s Kosovo Advisory Opinion, Antonello Tancredi
5. Secession, Territorial Integrity and the Role of the Security Council, Stefan Oeter
6. The OSCE and Kosovo, Matthias Niedobitek
7. The European Union and Kosovo in the Light of the Territorial Issue, Isabel Lirola Delgado
8. Drawing borders as a means to restore and maintain peace: from Palestine to Kosovo and back, Michael Bothe
9. Decisions of the UN Security Council of Indefinite Duration: How to Define the Limits of Their Valildity, Andrea Gioia
10. The Kosovo Opinion and Issues of International Responsibility, Helmut Philipp Aust
11. “You Say You´ll Change the Constitution” – The ICJ and Non-state Entities in the Kosovo Advisory Opinion, Andrea Gattini
12. The Structure and Content of the Austrian Statements in the ICJ Advisory Proceedings Concerning Kosovo, Gerhard Hafner/Nadia Kalb
13. The political future of Kosovo after the ICJ Opinion: Status question (un-)resolved?, Solveig Richter

International and European Law institutes at universities, institutes for political science and research, State chancelleries, Foreign ministries, international newspapers, all those interested in history, political events and in the developments of the Balkans.